Enforced Disappearances in Punjab: Family of Amritsar Man Gets Death Certificate After 25 Years

Amritsar:  With the passage of time the wounds of the bereave family has failed to heal, which was a target of police atrocities during militancy in Punjab as a victim of “enforced disappearance” has been issued death certificate after 25 years, depriving the family of government job on compassionate ground.

Manjit Singh Sethi, 37, was serving as a junior engineer in the Punjab State Electricity Board (PSEB) and was leading a happy life with his wife, two sons and a daughter.

But November 11, 1992, turned out to be a black day for the family when Manjit Singh Sethi was picked up by unidentified cops from his house near the Darbar Sahib. His family waited in hope, but he never returned. “He was playing with kids after returning from work when cops from Tarn Taran came and asked my husband to accompany them,” said victim’s wife Paramjit Kaur, reads a quote from a report published in an English vernacular. 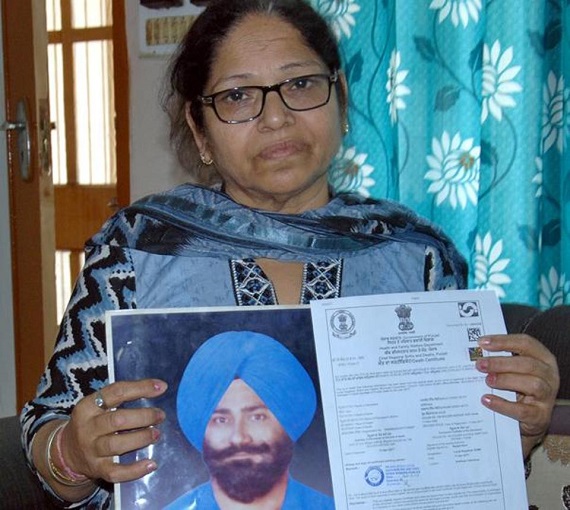 She said her daughter Jasmine Kaur, sons Simranjit Singh and Harkirat Singh were six, five and one-and-half-year-old at that time. “We made several rounds of police stations in Tarn Taran and Amritsar districts to know his whereabouts, but in vain. The police didn’t even lodge a missing person’s complaint,” said Paramjit Kaur, adding that they didn’t find her husband’s name in the list of persons killed in police encounter, reads a quote from statement given by her to the media.

“As my husband was the sole breadwinner of the family, it was tough for us to make ends meet after his disappearance. We got no monetary aid from the PSEB. As I was a graduate, I got a job in a private school,” he further adds to her statement.

She also moved the Punjab and Haryana high court and approached the President of India, but all in vain.

“The PSEB authorities asked for my husband’s death certificate when I sought a job on compassionate grounds in 2012. And the insurance claim was also not released for want of the same document,” she said.

Having lost all hope, Paramjit met human rights activist Paramjit Kaur Khalra and advocate Sarabjit Singh Verka and I filed a suit in a local court in September, 2013 to get the death certificate. After three years, the court ordered the authorities concerned to issue the document in October 2016. While pronouncing the order, the court observed that the death certificate should have been issued within seven years of Sethi’s disappearance. Paramjit, who got her husband’s death certificate a few days ago, is 62 now and cannot get a job.