Richmond, CA (May 18, 2017) – Two men were found guilty on felony assault and hate crime charges and sentenced to a three-year term in California state prison on Thursday (May 18) for the brutal attack against Maan Singh Khalsa.

Maan Singh Khalsa, a Sikh American father and IT specialist, was viciously assaulted on September 25, 2016. While Maan Singh Khalsa was stopped at an intersection, the attackers got out of their truck and assaulted Maan Singh Khalsa through his open car window, hitting his face repeatedly, knocking off his Sikh turban and cutting his hair with a knife.

“It will take me many years, maybe the rest of my life to heal from this attack. But the recognition of the attack as a hate crime – as harm to my dignity and my entire community – is the first step in the process,” said Mr. Khalsa during his statement in court today. “I am deeply thankful to the Sikh Coalition for working with local authorities to ensure that this happened.” 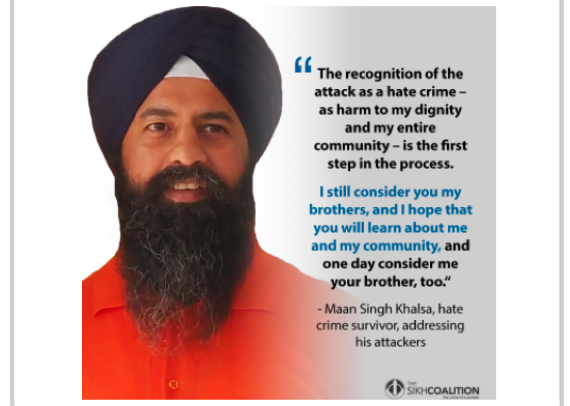 Prior to the charges, the Sikh Coalition, community leaders, and a coalition of civil rights organizations, advocated vigorously on behalf of Maan Singh Khalsa, urging for a hate crime investigation and prosecution.

“Acknowledging that this bias-based attack is a hate crime under state law both recognizes the deep dignitary harm to Maan Singh Khalsa, and ensures that we, as a society, confront the problems of Islamophobia, racism and xenophobia that make the Sikh community a target for violence,” said Sikh Coalition Staff Attorney Pawanpreet Kaur.

In April, a Sikh cab driver in New York City was assaulted and had his turban pulled off his head. In March, a Sikh man was shot in Kent, WA after the attacker told him to “go back to your own country.” In February, a Indian immigrant, Srinivas Kuchibhotla, was shot and killed in Olathe, Kansas after the attacker yelled, “get out of my country.”

The Sikh Coalition, US based Civil Rights and Advocacy group said: “In response, the Sikh Coalition is placing even greater emphasis on our work to combat and prevent hate. In recent weeks, we have shared information in English and Punjabi on gurdwara security and reporting hate incidents. Please review this information and share it with your gurdwara. We must remain vigilant. If someone says hateful things about your Sikh identity, don’t ignore it – rather, report the incident to the Sikh Coalition on our Report Hate website – www.reporthate.org – or request our legal help by filling out our intake form”.