Raipur: The Chhattisgarh police must conduct a prompt, independent and impartial investigation into allegations by over 80 Adivasi villagers in Raigarh, Chhattisgarh that they had been unlawfully dispossessed of their lands by people acting as agents for two private companies.

On 14 June, 81 Adivasi women and men tried to file First Information Reports at the Scheduled Castes and Scheduled Tribes Welfare Special Police Station in Raigarh, alleging that they had been forced into selling their land – as a result of threats, intimidation, coercion and misinformation – to agents of TRN Energy and Mahavir Energy Coal Beneficiation Limited (MECBL), operating in collusion with local land registration officials.

The police accepted the complaints, but refused to register First Information Reports and stated that they would first conduct a ‘preliminary enquiry’ to determine if a cognizable offence had been committed. Under India’s Code of Criminal Procedure, preliminary inquiry is required to be concluded within 15 days, or six weeks in exceptional situations.

“Adivasi villagers have a constitutional right to access to justice,” said Karthik Navayan, Programme Manager, Business and Human Rights at Amnesty International India. “The Chhattisgarh police cannot ignore their duty to investigate these allegations and prosecute those suspected of responsibility for human rights abuses. Given the scale of the alleged abuses, the police must also investigate whether these allegations provide evidence of a pattern of wrongful dispossession of land.”

Several members of local communities in the villages of Khokhraaoma, Katangdi, Bhengari and Nawapara Tenda, many of whom are not formally literate, told Amnesty International India that they had been forced into selling their land to people acting as agents for TRN Energy, a subsidiary of ACB India Power Limited, in 2009, 2010 and 2011. TRN Energy operates a 600 MW coal-fired thermal power plant in Khokhraooma.

Similarly, residents of the villages of Bhengari said they were forced to sell their land to agents for MECBL in 2004 and 2007. MECBL operates a 12 MW biomass power plant in Bengari. Gram sabhas (village assemblies) in the affected villages have passed resolutions in 2015 and 2016 stating that their lands had been purchased through fraud and coercion.

Karamsingh Rathia, an Adivasi man from Katangdi village, told Amnesty International India: “The company people came to me and asked to sell my land. I refused to sell, but a middleman said that since my land was in the middle of the proposed company site, I had to sell it. They frequently visited me and compelled me to sell. They also threatened our family. Now TRN has constructed a chimney there.”

Kalamati Rathia, an Adivasi woman from Benghari village, said: “I had two acres of farmland at village Bhengari which I got from my father. A middleman for Mahaveer frequently visited us and compelled us to sell our land. One day along with other villager, they took me to another person’s house where they took my signature and gave me 2000 rupees. We thought that the company had purchased our land, but the sale deed listed someone else’s name as a purchaser.” 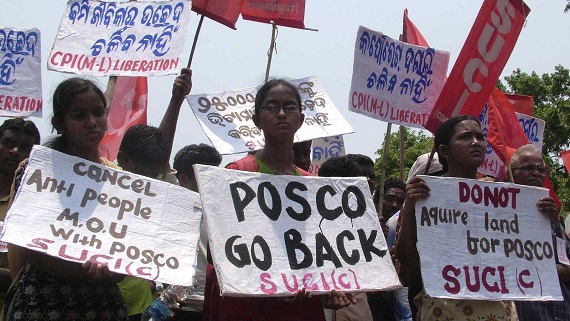 The Scheduled Castes and Scheduled Tribes (Prevention of Atrocities) Act (PoA Act)  – a special law to protect the rights of Dalits and Adivasis – criminalizes the wrongful dispossession and interference with the lands of Scheduled Castes and Scheduled Tribes. In January 2016, Parliament passed an amendment to the Act, which, among other things, inserted an explainer stating that the word “wrongfully” included dispossession or interference done “without the person’s consent”, or “with the person’s consent where such consent has been obtained by putting the person…in fear of death or hurt”.

On 9 May, the National Commission for Scheduled Tribes directed action to be taken under the PoA Act in cases where Adivasi land was transferred to other people through forgery. The order followed recent allegations that over 300 acres (121 hectares) of Adivasi land had been unlawfully transferred to non-Adivasis in Kunkuni village, Raigarh between 2009 and 2015.

Amnesty international India wrote to TRN Energy on 27 April and to MECBL on 3 May seeking their response to the allegations of Adivasi communities. The companies have not responded to date.

The UN Guiding Principles on Business and Human Rights state that businesses have a responsibility to respect human rights, and reiterate that states have an obligation to protect against human rights abuses by business enterprises, including by taking appropriate steps to investigate, punish and redress such abuse.