Chandigarh: The Shiromani Akali Dal (Badal) MLAs yesterday walked out of Punjab Vidhan Sabha after the name of former Punjab DGP KPS Gill was not dropped from list of deceased persons to whom the house was to make obituary reference. A day before that SAD (B) had written a letter to Punjab CM and speaker of Punjab Vidhan Sabha to drop infamous cop’s name from the list as his tenure had seen massive human rights abuses and fake encounters in Punjab. 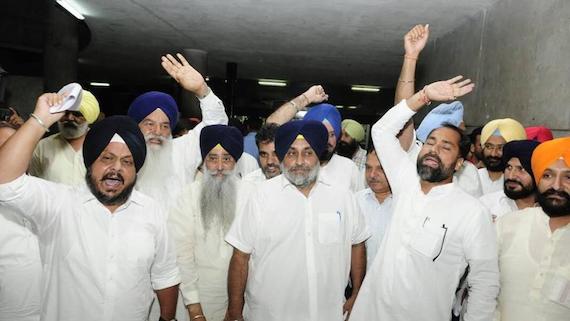 It is notable that the Shiromani Akali Dal (Badal) itself does not hold any impressive record in cases of acting against the human rights abusers. The SAD (Badal) government had protected infamous Punjab police cop and former Punjab DGP Sumedh Saini in the Supreme Court of India in a case related to gross human rights abuses in Punjab. The move, though seems to be motivated from political interests of SAD (Badal), has once again put on record that KPS Gill was a mass human rights abuser and there were systematic and widespread abuses of human rights in Punjab during 1980s-90s.

SAD (Badal) on Wednesday also issued a written statement, which reads as follows:

(Says Phoolka should explain his inaction on issue to Sikh masses)

In a statement here, the SAD President said it was surprising that both the chief minister and the Speaker had chosen to disregard the voice of the Sikh community and did not drop the former DGP’s name from the obituary references made in the Vidhan Sabha today. He said this deliberate inaction despite a written demand sent to both of them had forced the SAD to walk out in protest when the house took up the issue of reading obituary references today. We will continue to protest any move to honour such anti-Sikh elements”, he added.

Mr Sukhbir Badal said controversial cop Gill’s hands were tainted with the blood of innocents. “Gill’s tenure as DGP of Punjab witnessed gross human rights abuses. Extra judicial killings were the order of the day. Many Sikh youth still remain untraced. Even chief minister Capt Amarinder Singh recently admitted that 21 Sikh youth who had surrendered at his instance had been eliminated. All this happened during Gill’s tenure as DGP. As leader of the House Capt Amarinder should have ensured such a controversial figure was not honoured in any form today”, the SAD president said.

Speaking about Gill’s conviction in a sexual harassment case in which he was accused of outraging the modesty of a senior IAS officer, Mr Badal said the Speaker should have taken due note of this and struck off the former cop’s name from the list of obituary references himself. “The august house cannot pay tributes to a person with such a track record”, he added.

The SAD president also took note of the fact that AAP Punjab president HS Phoolka had refused to express solidarity with the Sikh masses on this issue. “Phoolka likes to style himself as a champion of all Sikh causes. As leader of the opposition it was expected that Phoolka would lead the protest against honouring Gill or at least support the SAD. He did neither. He should explain his stand to the Sikh panth forthwith”.

The SAD president said it would not be fair to the memory of freedom fighters to pay tributes to them alongside that to a human rights violator. He also made it clear that the SAD was only against paying tributes to Gill and had the utmost respect for freedom fighters and all other prominent personalities to whom tributes were paid by the house today.