Connecticut:  As per a release by the Sikh Coalition the fifth anniversary of the tragic August 5, 2012 shooting in the Oak Creek Gurdwara Sahib, in which 9 members from the local Sikh community lost their lives will be observed as a  ‘Day of Sewa’ (selfless community service) events across the United States of America (USA).

The annual event will observed on August 5, 2017 as a Day of Seva to commemorate the lives lost and pay rich tributes to the Oak Creek community that is forever impacted, by this barbaric incident. 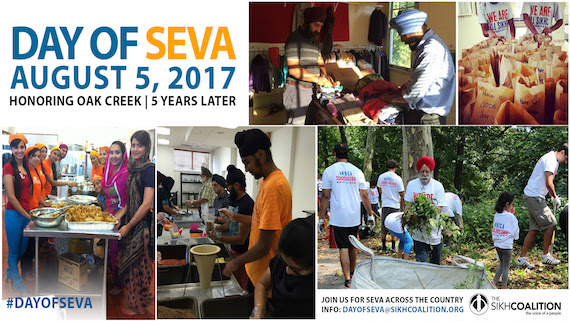 In its press release the Sikh body while giving detail account of the forthcoming event said that ‘Day of Seva’ events are an opportunity to show the Oak Creek community and the American public that Sikh Sangat stands in solidarity with communities impacted by hate. It’s also a chance to build interfaith bridges with other community partners, educate neighbours about Sikhism through media work, and pay tribute to the innocent lives needlessly taken on August 5, 2012.

“This year, we’re expecting enormous turnout across the country in our shared effort to make sure that no American forgets what happened in Oak Creek,” reads a quote from the statement of Sapreet Kaur, Excutive Director of Sikh Coalition.

“Hate in America is on the rise and impacts so many communities, but we have an opportunity to stand up and lead out in pushing back on this problem.”