New Delhi: The Indian government  must ensure that there is no impunity for those responsible for public lynchings and other hate crimes against Muslims in several states, said Amnesty International India today.

Since April 2017, at least ten Muslim men have been lynched or killed in public in suspected hate crimes, amid a rising tide of Islamophobia in the country. The attacks have contributed to a growing sense of insecurity for many Muslims, and intensified religious tensions. On 28 June, demonstrations against the attacks on Muslims are being held in several cities across India.

“The pattern of hate crimes committed against Muslims with seeming impunity – many of them in states where the Bharatiya Janata Party is in power – is deeply worrying. Unfortunately both the Prime Minister and various Chief Ministers have done little to show that they disapprove of this violence,” said Aakar Patel, Executive Director, Amnesty International India.

“The BJP’s campaign for cow protection appears to have emboldened vigilante groups, who seem to be operating in some cases with the tacit approval of state authorities. BJP leaders have ignored, or worse, even justified the attacks at times.

“This growing trend of Islamophobia needs to be stopped in its tracks. The Indian Prime Minister, senior BJP leaders and Chief Ministers must break their silence and unequivocally condemn the attacks. State police departments must ensure that those responsible are brought to justice. 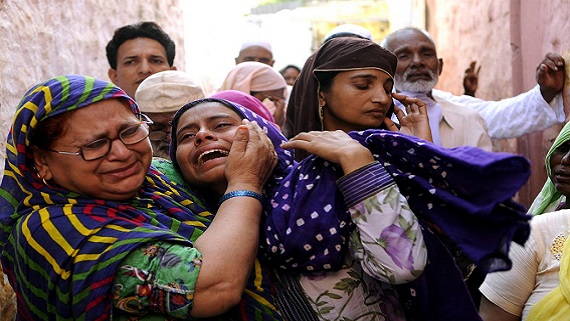 “Mob violence has occurred in other cases too, including attacks on Dalits suspected of illegally transporting cows, the killing of alleged child traffickers in Jharkhand, and the lynching of a police officer at a mosque in Kashmir. All these attacks are deplorable, and seem to indicate a weakening of the rule of law.”

Usman Ansari, a dairy farmer, was beaten up by a mob of about 100 people and part of his house set on fire, reportedly after a dead cow was seen outside his house. Police officials told journalists that the attackers had also thrown stones at them, injuring 50 police personnel.

Nasirul Haque, Mohammed Samiruddin and Mohammed Nasir, three construction workers, were beaten to death by a mob, allegedly for stealing cows, in North Dinajpur, West Bengal. Three people have been arrested so far, and a murder case registered. However the state police maintain that there was no religious motive for the attack.

15-year-old Junaid Khan was stabbed to death inside a train in Haryana, when an argument about seating arrangements turned into an attack based on religious identity. Junaid was called a ‘mulla’, a ‘beef-eater’, and his skull cap thrown away, before he was stabbed. His brother was severely injured. Survivors’ accounts in some media reports say that at least 20 people were involved in the attack. The state police have arrested one person.

44-year-old Zaffer Hussain died after being beaten by civic officials in Pratapgarh, Rajasthan after he objected to them photographing and taking videos of women defecating in the open, ostensibly for a sanitation campaign. An autopsy report said that Hussain died of a cardiac failure, but his family and eyewitnesses maintain that he was beaten to death.  A murder case has been registered against the local municipal commissioner along with three municipality workers. The police have not yet made any arrests.

Two Muslim meat traders were attacked by a cow vigilante squad in Malegaon, Maharashtra on suspicion of possessing beef. Video footage of the incident appeared to show the men being slapped and abused, and told to say “Jai Sri Ram” (“Hail Lord Ram”). Nine men have been arrested. However, the two meat traders also face criminal charges for “outraging religious feelings”.

65-year-old Ghulam Mohammed was beaten to death in Bulandshahr, Uttar Pradesh, after a Muslim man and a Hindu woman reportedly eloped from the village. The attackers were allegedly members of the Hindu Yuva Vahini, a Hindu nationalist group which has run a campaign against ‘love jihad’ – an alleged conspiracy by Muslim men to seduce Hindu women and convert them to Islam. The state police have arrested three men.

Abu Hanifa and Riazuddin Ali were lynched by a mob in Nagaon, Assam on suspicion of cow theft. The police have registered a murder case, but have not yet made any arrests.

19-year-old Mohammed Shalik was tied to a pole and beaten to death, reportedly because he had a romantic relationship with a Hindu girl. Three people have been arrested, but the police say that the killing was not a communal incident.

55-year-old farmer Pehlu Khan, a dairy farmer, and four other Muslim men were assaulted by a mob near a highway in Alwar, Rajasthan. Khan died two days later. The mob falsely accused the men of being cow smugglers. Following the killing, the Home Minister of Rajasthan, in a statement that appeared to justify the killing, said that Khan belonged to a family of cow smugglers. Three people have been arrested.