Chandigarh: A news story published by Time of India’s Ahmedabad edition about 300% increase in assets of Bhartiya Janta Party (BJP) president Amit Shah in last five years stands removed from the website of the newspaper, just hours after it was published on Saturday (July 29).

Interestingly, the url of the news where the news content was earlier posted, offers no explanation. Moreover, as The Wire has noted, no explanation has been given and no editor is willing to take responsibility for having pulled the plug on the news item.

A visit to the url shows “404 PAGE NOT FOUND. We’re sorry, we seem to have lost this page, but we don’t want to lose you”.

The story, which reported how BJP chief Amit Shah’s assets had grown by 300% between 2012 and 2017 is also removed from Economic Times. 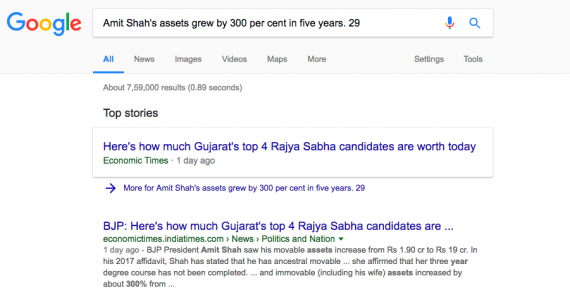 A text string search (text: “Amit Shah’s assets grew by 300 per cent in five years. 29”) on Google shows headline and link to Economic Times website. The ET headline read: “Here’s how much Gujarat’s top 4 Rajya Sabha candidates are worth today” and excerpt reads: “BJP President Amit Shah saw his movable assets increase from Rs 1.90 cr to Rs 19 cr. In his 2017 affidavit, Shah has stated that he has ancestral movable … she affirmed that her three year degree course has not been completed. … and immovable (including his wife) assets increased by about 300% from …”. 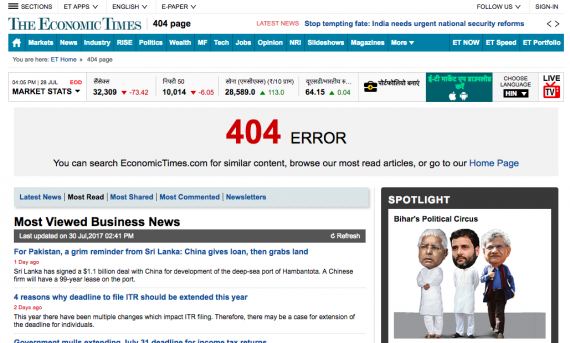 But when SSN visited the link it says: “404 ERROR. You can search EconomicTimes.com for similar content, browse our most read articles, or go to our Home Page”.

The images of the paper/e-paper edition of the story are making rounds over social media and are also reproduced by certain news-media networks, including The Wire. The news concerned reported by ToI had stated that: “BJP […] president Amit Shah saw his movable assets increased from Rs. 1.90 crores to Rs. 19 crores. In his 2017 affidavit, Shah has stated that he has ancestral movable property worth 10.38 crores. Shah’s movable and immovable (including his wife assets increased by about 300% from 2012. His assets (movable and immovable) which were worth Rs. 8.54 crores in 2012 are now worth Rs. 34.31 crores”.

The Wire has noted that “similar news item published on July 29 by DNA’s (Daily News Analysis) print edition was also deleted from its website”. “The story is, however, still available in DNA’s e-paper”, The Wire noted in a news-story published on July 30.

The Wire notes that: “This isn’t the first instance of the Times Group deleting stories without informing its readers of the reasons. Ironically, a report on India’s low ranking on the World Press Freedom index was pulled down from the TOI and ET websites in May. When News Laundry contacted the then TOI.in editor, Prasad Sanyal, to know why they decided to pull down the article, they were informed that it was the media house’s ‘editorial prerogative’.”

Interestingly, a news-story published on Amit Shah’s assets increase by Outlook India (Hindi Edition) is not showing up the website of Outlook India Hindi, however, Aam Aadmi party leader Ashutosh tweeted a google amp link of the Outlook India story which works on mobile devices (however it does not work on Laptops or Desktops).

Amit shah should explain How his property increased by 300% in 5 years ? What business he is doing ? https://t.co/QTALZCOtAn