The much anticipated historical film The Black Prince released on Friday July 21, 2017. The film has garnered appreciation worldwide. Be it facts, acting performances or locations, every facet of the movie has been thoroughly worked upon and hence the positive result. This film is nothing short of becoming a cult in the field of cinema, as it has impressed the audience emotionally, and updated them factually. The film has been critically acclaimed and has touched the hearts of each and every one who has seen this.

Talking about the performances, singer turned actor Satinder Sartaaj has surely done a commendable job. He embraced the soul of Maharaja Duleep Singh, and thus humanized him on the big screen. Shabana Azmi in the role of Maharani Jindan has left a deep impact on the viewers. She rekindles the fire in her son to regain his kingdom and freedom for his people. Her natural delivery as a Queen mother, and the effortless Punjabi that she spoke, shows her strength as a performer. Both Shabana Azmi and Satinder Sartaaj have so very convincingly enacted their respective roles, that one cannot imagine another actor/actress outperform them. 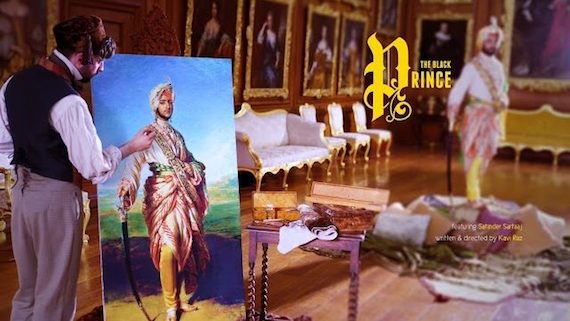 Satinder Sartaaj in and as The Black Prince [File Photo]

Film director Kavi Raz, has very delicately dealt with the story. The facts haven’t been moulded or twisted to enhance the entertainment quotient of the film. Rather, it is noteworthy to mention that the distorted and twisted facts have been set right in this film to acquaint the people with the reality of how the events took an unfortunate turn in Duleep Singh’s life after the death of his father Maharaja Ranjit Singh. This true to life story is an honest attempt to throw light on the life of the man who was born, yet forbidden to rule!

It is visually stunning, shot at picturesque locations. The brilliance of costumes, jewels, and other details revealed the royalty of the kingdoms. The film’s music, released by Saga Music, has gloriously won a million hearts. All in all, the movie evokes various emotions in the audience.