Washington: As per the media reports emanating from the US people cutting through various sections of the society here on Sunday have called for combating racism, intolerance and violence during the fifth anniversary of the tragic Oak Creek massacre that killed six innocent Sikhs five years ago. 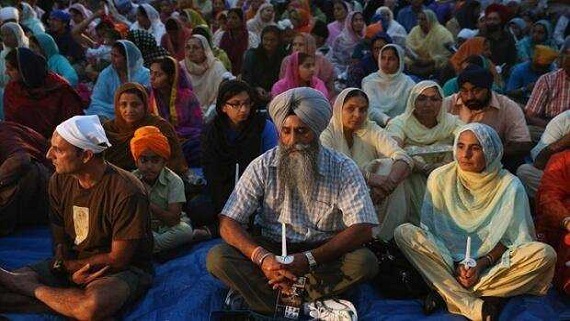 Sikhs at a condolence meeting in Wisconsin.

It was on August 5, 2012, a white supremacist named Wade Michael Page killed six believers of the Sikh faith in their house of worship, a Gurdwara, outside of Milwaukee, Wisconsin.

In the five years since, members of the Gurdwara have organized scholarships, blood drives, 6K walks and runs, and presentations on understanding the Sikh faith in local schools, reads a quote from report published in local media tabloid.

“My outreach is also a coping mechanism,” Pardeep Kaleka, whose father was one of the six victims, told Voice of America (VOA). “Processing my own pain and hurt… I’d rather just go into the community and make it better for everybody else.”

Paul Ryan, Speaker of the US House of Representatives, reportedly said “Over the last five years, the people of Oak Creek have proved they’re stronger than hate and division.” Ryan represents the Congressional district in Wisconsin. “Five years ago, Oak Creek was rocked by a heinous attack on the Sikh Gurudwara, and today we look back on that act of violence with solemn remembrance of those who were lost,” he adds to his statement.

Navdeep Singh Gill co-founder of the outreach program called “Serve to Unite,” with Kaleka, said that they soon realised that they also needed to spread awareness outside the Gurudwara after members of the community said they were uncomfortable attending Sikh services.

“Whatever faith you practice, whatever community you come from, you should feel comfortable attending an event,” he adds.

“The Sikh community is in our thoughts on this fifth anniversary of the Oak Creek attack,” reads the statement of  Senator Ron Johnson published in The Tribune (TT).

“It’s not just about organizing 5Ks, it’s about… what we’re really being asked to do spiritually,” Pardeep Kaleka said. “I think there’s a reason [the shooting] happened, a reason those people who stood up made that sacrifice. This community has really stood up.”

“At a time when divisive rhetoric has taken over our country, Sikhs have to remain vigilant while still staying in steadfast to their beliefs and principles,” said Baldev Singh from the Sikh American Legal Defense and Education Fund, reads a quote published on Patch.com.