London: As per the media sources a strong joint protest by Kashmiris and Sikhs was witnessed outside the Indian High Commission in London on Tuesday that produced a vivid condemnation of India’s systematic denial of freedom in Kashmir and in the Sikh homeland of Punjab. 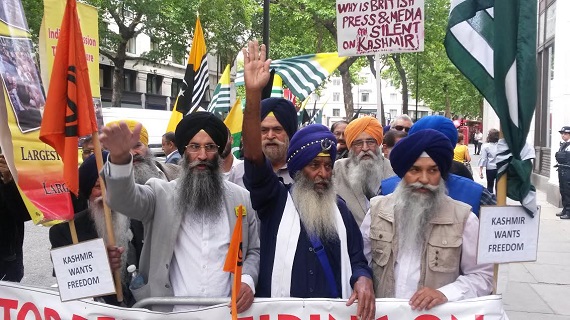 India’s independence in 1947 saw those regions bundled in to the Hindu majority state of India and kept there by the use of massive military force at the cost of hundreds of thousands of lives. Calling for the international community to intervene, Sikh and Kashmiri organisations reportedly pointed to India’s tainted record of overt and covert actions which have reduced internationally accepted human rights standards to irrelevance in those regions.

India’s formal ‘reservation’ lodged at the UN against the right of self-determination as enshrined in the 1966 Covenants on Human Rights, which position has been condemned by many democratic states, makes it clear that the Indian state has replaced one form of colonialism with another said the protestors. 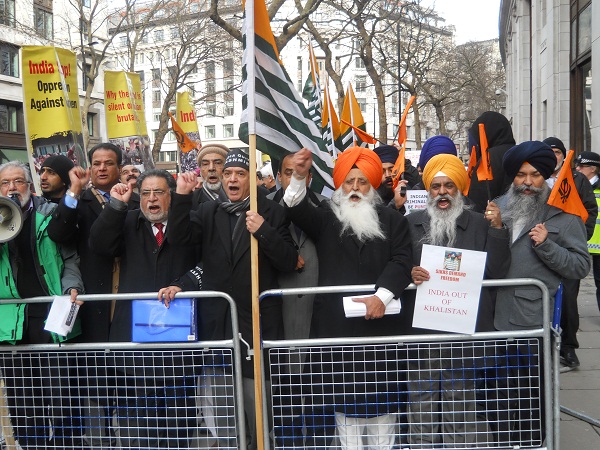 Categorically, India’s use of mass killings amounting to genocide, extra-judicial murder by security forces, rape as a weapon of war, arbitrary detention and torture in order to crush calls for freedom in those regions have been well documented but, their legitimate demand for freedom cannot and will not be silenced, the organisers of the protest purportedly said.

It is learned that the abhorrent campaign of minority bashing unleashed by the Hindutva forces across India were also condemned at the protest; Indian PM Modi’s hollow and statements are fooling no one. The recent report issued by the US Commission on International Religious laid bare the institutionalised targeting of Muslims, Sikhs, Christians and Dalits and saner voices from within India are demanding an end to this cowardly aggression by Rashtriya Swayamsewak Sangh (RSS) inspired goons and political parties alike.

The protestors also ridiculed India’s posturing in the stand-off with China which has seen Indian troops attempting to extend that Hindutva aggression to a neighbouring state. The Sikhs and Kashmiris roundly condemned that move and suggested that Indian forces will find it somewhat more difficult to take on China’s armed forces than the defenceless men, women and children that it regularly ‘takes on’ in the traumatised regions of Kashmir and Punjab, media sources said.