Dera Sauda Sirsa Headquarter Cordoned Off By The Indian Army, No Plan To Enter The Premises

Chandigarh: As per the media reports a large number of Indian Army troops along with state police and Rapid Action Force (RAF) personnels have cordoned of the Sirsa based Dera Sauda Sirsa headquarter of rape convict Gurmit Ram Rahim. The action has come a day after Dera Premis went berserk following the conviction announced by special CBI court in Panckula. 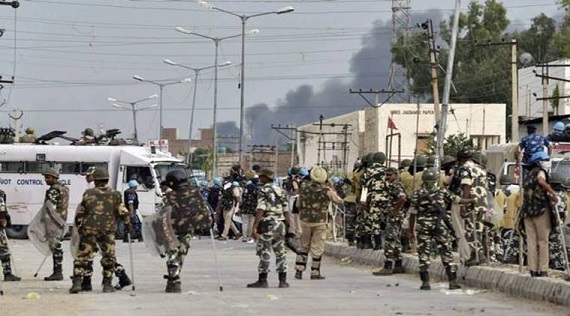 These Dera Premis when out on rampage that lead to the death of atleast 31 people and over 250 were injured in the clashes that have  spread to other parts of Haryana, Punjab and neighbouring states of Delhi, Rajisthan and Uttar Pradesh . It is believed that the headquarter surrounded by the Indian army is still having atleast 10,000 members of the Dera cult.

Furthermore, it is reported by the media that Near the Sirsa campus, 2 AK-47s and a pistol have been found in a car. Centres of the cult in different cities, dubbed as Naam Charcha Ghars, are being searched and sealed. Fifteen Dera cult supporters have been arrested since last night.

Moreover, curfew continues to  be in place in Panchkula, Sirsa and Kaithal in Haryana as well in some towns in Punjab. Large gatherings have been banned in 11 districts of Delhi, nine districts of Uttar Pradesh and one in Rajasthan after violence along the border with Haryana.