Westminster: The All Party Parliamentary Group (APPG) for British Sikhs and an adviser to the Sikh Federation (UK) reportedly met with Iain Bell, the Deputy National Statistician and his team to discuss the demand of a separate Sikh ethnic tick box in the Census 2021.

Preet Kaur Gill the Labour MP for Birmingham Edgbaston and the Chair of the APPG handed ONS a letter addressed to John Pullinger, the UK National Statistician and Head of the Office for National Statistics (ONS). The letter was signed by nearly 140 MPs and demanded a separate Sikh ethnic tick box, claims a press release by the Sikh Federation UK. 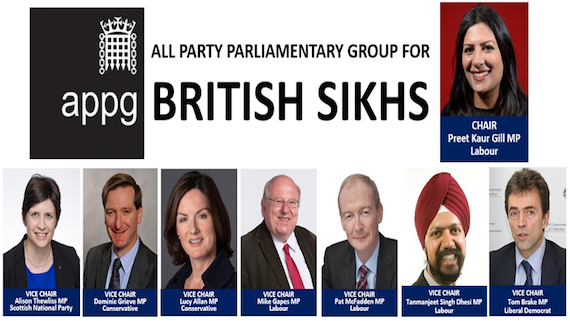 Preet Kaur Gill said: “The number of MPs signing the letter could easily have been doubled or even tripled as there is universal support for Sikhs on this issue. We simply stopped adding additional signatures as we were meeting with ONS.”

“ONS now know in no uncertain terms that it must recommend to Parliament the inclusion of a separate Sikh ethnic tick box in the Census 2021 or it will be overturned by MPs.”

A number of points were put across to the ONS, including Sikhs are a legally recognised ethnic group that are protected from discrimination under UK law following the House of Lords ruling in the Mandla v Dowell Lee case in 1983.

MPs mentioned the last Census in 2011 showed a staggering 83,362 Sikhs ignored the existing tick box options and used the write in option to state their ethnicity as Sikh. This was almost an eight fold increase compared to the Census 2001 and several times higher than any other group choosing to use the write in option.

It was pointed out that in the Census 2011 ONS know that amazingly nearly 7,000 Sikhs when answering the ethnic question wrote in Sikh even though they did not indicate they were Sikh in response to the optional religious question. A clear indicator that the religion question in 2011 underestimated the Sikh population.

Preet Kaur Gill added: “Simple logic and an understanding on the requirements of the Sikh faith should tell ONS that tens of thousands of Sikhs would not have answered the optional religious question alongside the 20 million who did not answer the question or specified no religion. However, they would have been forced to select an existing ethnic group in the absence of a Sikh ethnic tick box.”

“I am shocked ONS came along to MPs yesterday and admitted they have done very little work to establish how many Sikhs may not have answered the religious question in 2011. My own personal view is if around 1 in 20 or 1 in 30 of Sikhs who did not specify their religion took the effort to right in Sikh as their ethnic group the number of Sikhs may be underestimated by as much as 200,000.”

ONS confirmed that adding a Sikh ethnic tick box was under active consideration and agreed to an urgent meeting and work with the Sikh Federation (UK) and Sikh Network to use alternative methods to establish the extent to which the religious proxy underestimates the total number of Sikhs, reads the release issued by Sikh Federation UK.

The meeting confirmed stakeholder consultation in 2016 showed there was a clear demand for a Sikh ethnic tick box not only from the Sikh community, but those working in the education, health, local government and business sectors. It was confirmed that in the stakeholder consultation no one raised any objections to the inclusion of a Sikh ethnic tick box, the Sikh Federation said.

It further stated that: [d]uring the meeting ONS confirmed they would take into account the results of the UK Sikh Survey 2016 conducted by the Sikh Network and shared with ONS in November 2016. This had over 4,500 Sikh respondents from across the UK and 93.5% stated they wanted a Sikh tick box and 19 out of 20 preferred to be identified as Sikh rather that Indian or Asian given the choice.

Preet Kaur Gill added: “Adding a Sikh ethnic tick box in the next census is a no-brainer given the demand from all concerned including MPs.”

“ONS also came under attack for its guidance on ethnic groups to monitor. Public bodies (schools, hospitals, local authorities, police, central government and other public bodies) have been advised by the ONS in guidance issued in 2003 and 2011 to only use ethnic group categories in the census for monitoring purposes”, notes Sikh Federation UK.

Preet Kaur Gill added: “I was troubled to learn in the meeting that Sikh organisations had convinced the Commission for Race Equality in 2002 to change its publication ‘CRE Ethnic Monitoring, A guide for public authorities, July 2002’, to give Sikhs as an example for ethnic group monitoring following the Census 2001. But this has been repeatedly and consistently undermined and contradicted by ONS guidance to public bodies to only monitor ethnic groups in the census.”

“ONS were told in the meeting this amounts to discrimination against Sikhs under the Equality Act 2010. The monitoring guidance ONS issued in 2011 given the number of Sikhs who chose the write in option and the Treasury Solicitor’s response to the Sikh Federation (UK) judicial review claim in 2010 leaves the ONS exposed to legal action. The Equality and Human Rights Commission (EHRC) will want to take note and follow this up.”

The APPG highlighted that in 2011 the ONS introduced two new ethnic group categories one for ‘Gypsy or Irish Traveller’ and the other ‘Arab’ although the numbers in these two groups were found to be only around 58,000 and 240,000 respectively.

The APPG reportedly grilled ONS on its test of the Sikh ethnic tick box and asked why a similar test was not carried out for the ‘Gypsy or Irish Traveller’ and ‘Arab’ categories last time before these new categories were recommended to Parliament. It was clear from the meeting this additional hurdle was deliberately introduced for Sikhs to maintain the status quo of using the religious question as a proxy that ONS know is inadequate.