The Khalsa Aid team, which is camping in the border town of Teknaf, told The Indian Express that the Bangladesh government finally gave all the clearances and permissions required to serve meals to the refugees. The team was initially distributing packed food items and water to the refugees.

The Khalsa Aid team, which is camping in the border town of Teknaf said that the Bangladesh government finally gave all the clearances and permissions required to serve meals to the refugees
On Thursday, the langar sewa began at a spot on Shahpuri Island (also known as Shapuree Island) where the refugees from Myanmar are landing after traveling for days in rickety boats.

Speaking to The Indian Express over phone, Amarpreet Singh, managing director, India for Khalsa Aid, said, “We cooked and served the first langar meals here today. We had purchased raw materials like rice, vegetables and big utensils on Wednesday after getting required permissions from the government of Bangladesh. The initial target is at least 35,000 meals per day. However seeing the increasing number of refugees here, we know it won’t be enough to feed all but we had to start somewhere.”

Seeing the ‘miserable state’ of the refugees, especially children who haven’t eaten for days, it was difficult for the team to decide from where langar should start, he added. 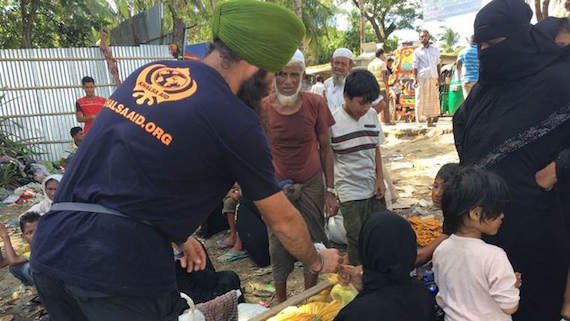 The Khalsa Aid team, which is camping in the border town of Teknaf said that the Bangladesh government finally gave all the clearances and permissions required to serve meals to the refugees

“We feared that there might be a stampede seeing food being served here. There are at least 3 lakh refugees here already. But a beginning had to be made though we cannot feed everyone here in a single day. People are in dire need of food here. Children are roaming and begging on roads for food. The condition continues to be miserable,” he said.

On the first day of the langar, Sikh volunteers served cooked rice and vegetables.

However, starting the community kitchen and making all preparations in the border town of Bangladesh, which continues to be flooded with Rohingya Muslims from Myanmar, wasn’t easy as the team initially faced some hiccups.

“We went to local markets to purchase utensils and raw materials. But some shopkeepers inflated the rates and quoted double prices seeing that we are outsiders. However many locals also helped us in making arrangements. We managed somehow. Attitude of the locals towards Rohingyas is varying at individual level. Some are really compassionate and trying to help them. They are even coming from far off areas to help them but then some are not. They are seeing them as burden on their country,” said Singh. 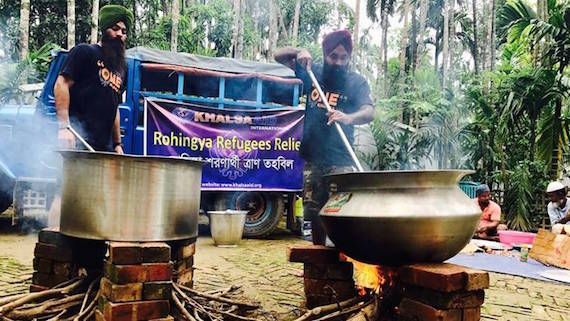 Before serving the meals, an ardaas (a prayer) was performed.

On Monday, The Indian Express first reported that a team of Sikh volunteers from India reached Bangladesh- Myanmar border town Teknaf to start relief operations and provide food to the Rohingya Muslim refugees fleeing Myanmar. The team told The Indian Express that the “condition at the border was miserable to say the least” and that their first priority would be to “provide food” to as many persons as possible.

Meanwhile, the Khalsa Aid volunteers back home are organizing fundraisers for the langar sewa at Bangladesh border. Gursahib Singh, a volunteer in Ludhiana said, “The langar there can continue only if we have requisite funds. We request people to donate for the sake of humanity. Please forget about religion barriers and think about the children who are sleeping with empty stomachs. They are also humans.”

Note: This news was originally reported by The Indian Express under title: “Rohingya Muslims crisis: ‘Guru ka langar’ begins at Bangladesh-Myanmar border, target 35,000 meals per day” by Divya Goyal at source url: http://indianexpress.com/article/india/rohingya-muslims-crisis-guru-ka-langar-begins-at-bangladesh-myanmar-border-target-35000-meals-per-day-4842965/. It is reproduced as above for the information of readers of the Sikh Siyasat News.