London: As per the media reports the District Line of London’s Tube network on Friday suffered a bucket bomb attack which injured several passengers and hit the morning rush hour.

The blast in a white canister at Parson Green Station in southwest London caused burn injuries to some passengers. Twenty two people were hospitalised after the incident, which was reminiscent of the July 7, 2005 bombings in the city. 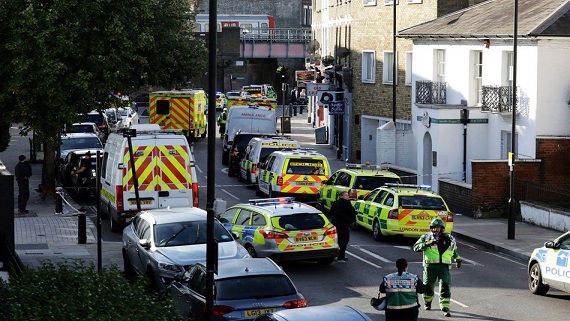 Members of the emergency services outside the Parsons Green Tube station in west London on Friday.

While interacting with the media the police authorities stated its Counter Terrorism Command was investigating the incident.

Police were called at approximately 8.20 am local time to the underground station following reports of a fire on a train, he further adds.

A hunt involving hundreds of detectives backed by the intelligence services was underway to find the perpetrators. Britain’s top counter-terrorism officer, Mark Rowley, declined to say if the suspected bomber had been on the train, saying it was a live investigation, media reports said.

Britain’s threat level remained at its second-highest rank of severe following the “cowardly attack” intended to cause significant harm, said Prime Minister Theresa May. But she added the threat level would be kept under review.

In the wake of the blast, there was a stampede at the station as people rushed to move out. The London Ambulance Service said several resources had been devoted to the incident.

Ordnance factory personnel were at the scene to investigate the blast. The District Line was closed between Earl’s Court and Wimbledon, with severe delays on the rest of the busy line, notes Hindustan Times (HT).