New Delhi: In an attempt to bolster its efforts to get Rohingya refugees deported due to their faith being problematic for the ruling elite, the Union home ministry on Monday reportedly filed an affidavit in the Supreme Court of India (SCI) on Rohingya Muslims’ deportation to Myanmar, terming them a “security threat to India”. 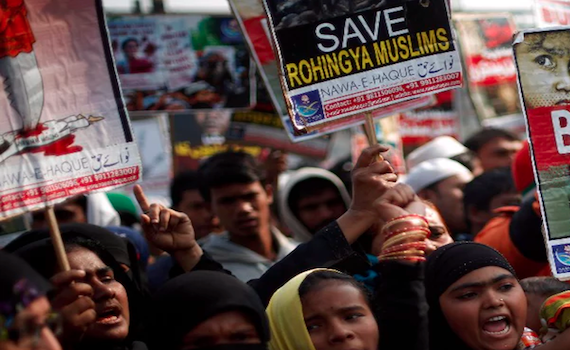 India must not forcibly return Rohingyas to Myanmar.

As reported by the media sources, the union government told the Supreme Court of India that the Rohingyas’ continued presence in India would have serious national security ramifications.

Furthermore, the media reports stated that  the petition filed by Rohingya refugees, is being argued by senior advocates Fali S Nariman, and Kapil Sibal. The Centre has said that the fundamental right to reside and settle in any part of India is available to citizens only. No illegal immigrant can invoke writ jurisdiction of the court for enforcement of Fundamental Rights enjoyed by citizens only, the Centre further said. The Supreme Court has said that it will hear the matter on 3 October at 2 pm. The Centre has responded saying that it would place all intelligence inputs before SC on October 3 to prove its claim that Rohingyas are a security threat, notes Times of India (ToI).

On 15th September Union home minister  Rajnath Singh on 15 September said that the government would inform the SCI  on its stand on the Rohingya immigrants on 18 September.

The SCI then fixed Monday for hearing a plea challenging the government decision to deport Rohingya Muslim immigrants back to Myanmar.

An affidavit on the issue, which the government had said was just a draft and was being worked upon, was leaked after it was inadvertently served on the counsel for petitioner Muhammad Salimullah. Salimullah moved the Supreme Court, asking the government to be restrained from deporting the Rohingya, reads a quote from a report published in Hindustan Times (HT).

In the reported affidavit , the Centre had claimed that there were “contemporaneous inputs” received by it that indicated links of some of the unauthorised Rohingya immigrants with armed outfits based in Pakistan and Bangladesh.