Chandigarh: Pakistan’s Foreign Minister Khawaja Asif has reportedly called Indian Prime Minister Narendra Modi as a “terrorist”, and further said the Indian government was being run by “a terrorist party”.

As per media reports, Khawaja Asif made the remarks in an appearance on Geo TV’s ‘Capital Talk’ show, in response to Indian External Affairs Minister Sushma Swaraj’s UN General Assembly speech last month, in which she had accused Pakistan of “producing and exporting terrorism”.
India’s ruling Bhartiya Janta Party has expressed it’s anger over the remarks about Narendra Modi by Pakistani minister. 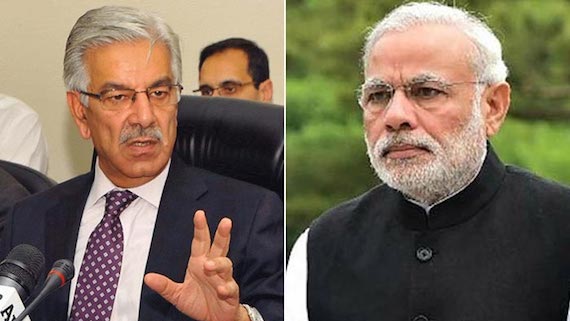 BJP spokesperson GVL Narasimha Rao said: “Pakistan Foreign Minister is a political pygmy in a powerless government kowtowing to the terror organisations. These pusillanimous comments reflect Pakistan’s frustration with Prime Minister Narendra Modi’s successful diplomacy in exposing the terror face of Pakistan to the world. That Pakistan is getting desperate is evident from these patently foolish and irresponsible comments”.

Khawaja Asif made the remarks while talking about Kashmiris who have been killed in Jammu and Kashmir and civilian casualties in cross-border firing along the Line of Control and the Working Boundary, the Dawn reported. “A terrorist is their (India’s) Prime Minister at this time. One whose hands are stained with the blood of the Muslims of Gujarat,” the report quoted him as saying.

“A terrorist party is ruling them (India)—the Rashtriya Swayamsewak Sangh (RSS) is ruling them. The Bharatiya Janata Party (BJP) is like its subsidiary organisation,” he said. “But Narendra Modi is an elected ‘terrorist’,” Hamid Mir, the show’s host, reminded Asif.