To commemorate 25th anniversary of their death anniversary the samagam was organized by the SGPC at Shir Akal Takhat Sahib. Bhog of Akhand path and Ardas was performed in memory of both. 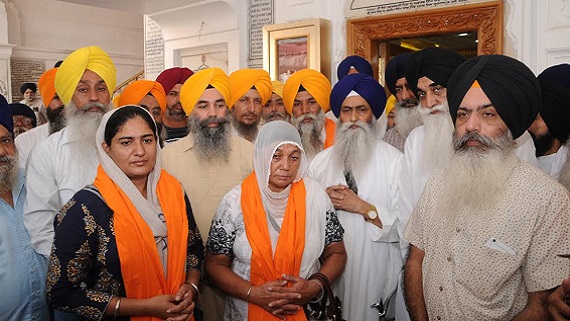 Relatives of Bhai Sukha & Bhai Jinda being honored by leaders of Panthic Organisations.

The head granthi of Darbar Sahib Gaini Jagtar Singh eulogized their contribution and supreme sacrifice for the cause of Sikh Panth. Singh said both sacrificed their lives to avenge the desecration of Darbar Sahib by Indian army in June 1984. He along with members of Sikh organization honoured brother and sister of Bhai Jinda and niece of Bhai Sukha with robe of honour.

Dal Khalsa president H S Cheema and spokesperson Kanwar Pal Singh termed them as martyrs of Khalistan struggle. Describing the assassination of General Vaidya as an act of bravery, Dal Khalsa leaders praised Bhai Sukha and Bhai Jinda for the exemplary courage shown during the trail of the case. “Instead of appealing for mercy they went to the gallows with smiling faces,” they said.