Disgraced and rejected Giani Gurbachan Singh’s sandesh on Bandi Chhor will have no relevance: Dal Khalsa

Amritsar: Calling his continuity as Jathedar of Akal Takhat a ‘bone of contention’, the Dal Khalsa today squarely blamed Giani Gurbachan Singh and his mentors (read Badals) for the bad blood created among the Sikhs in the religious domain.

In a hard hitting statement issued today, the Dal Khalsa termed Giani Gurbachan Singh as a disgraced and disgusting Jathedar who lacks legitimacy due to his faulty actions. Party’s former head Satnam Singh Paonta Sahib said there would be no relevance of his sandesh (message) on Bandi Chhor divas as such. He said Sikh Diaspora at large has already discarded him two years ago. Gaini Gurbachan Singh’s sandesh in the capacity of the Jathedar holds no water nor it has any meaning for Sikh sangat, the leader added. 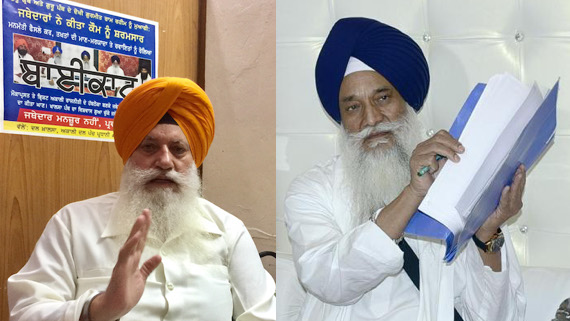 Commenting on the tension that was building up in the recent times, Dal Khalsa leader said Gaini Gurbachan Singh is himself responsible for the internecine clashes among Sikh groups as his continuity is too bitter to swallow for the devout Sikhs.

He said despite large section of Sikhs rejecting Gaini Gurbachan Singh as a jathedar after he committed blunder in pardoning Sirsa cult head Gurmeet Ram Rahim, Sukhbir Badal through its sheer arrogance was not allowing the SGPC to replace him. “Everyone is fed up with Gurbachan Singh except Badals on whose directions he pardoned the rapist baba”, he said.

Making his party position clear, he said, “We won’t be part of any activity that amounts to undermining or defiling the sanctity and decorum of Darbar Sahib”. While opposing physical fight within Sikhs in the Darbar Sahib or in any gurdwara, he said it goes against the Sikh tenets and principles besides damaging Sikh image.

The organisation made it clear that it would continue with its efforts to oust the disgraced jathedar as his continuity is a big blot on the exalted post. “We would continue to mobilize masses to get rid of Gurbachan Singh by exposing his misdeeds and wrongdoings”, he added.