Myanmar: New Evidence Of Systematic Campaign Of Crimes Against Humanity To Terrorize & Drive Rohingya Out

NewDelhi:  More than 530,000 Rohingya men, women and children have fled northern Rakhine State in terror in a matter of weeks amid the Myanmar security forces’ targeted campaign of widespread and systematic murder, rape and burning, Amnesty International said today in its most detailed analysis yet of the ongoing crisis. 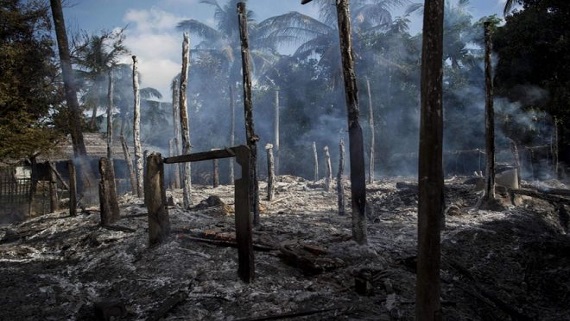 ‘My World Is Finished’: Rohingya Targeted in Crimes against Humanity in Myanmar describes how Myanmar’s security forces are carrying out a systematic, organized and ruthless campaign of violence against the Rohingya population as a whole in northern Rakhine State, after a Rohingya armed group attacked around 30 security posts on 25 August.

Dozens of eyewitnesses to the worst violence consistently implicated specific units, including the Myanmar Army’s Western Command, the 33rdLight Infantry Division, and the Border Guard Police.

“In this orchestrated campaign, Myanmar’s security forces have brutally meted out revenge on the entire Rohingya population of northern Rakhine State, in an apparent attempt to permanently drive them out of the country. These atrocities continue to fuel the region’s worst refugee crisis in decades,” said Tirana Hassan, Crisis Response Director at Amnesty International.

“Exposing these heinous crimes is the first step on the long road to justice. Those responsible must be held to account; Myanmar’s military can’t simply sweep serious violations under the carpet by announcing another sham internal investigation. The Commander-in-Chief, Senior General Min Aung Hlaing, must take immediate action to stop his troops from committing atrocities.”

Witness accounts, satellite imagery and data, and photo and video evidence gathered by Amnesty International all point to the same conclusion: hundreds of thousands of Rohingya women, men, and children have been the victims of a widespread and systematic attack, amounting to crimes against humanity.

The Rome Statute of the International Criminal Court lists 11 types of acts which, when knowingly committed during such an attack, constitute crimes against humanity. Amnesty International has consistently documented at least six of these amid the current wave of violence in northern Rakhine State: murder, deportation and forcible displacement, torture, rape and other sexual violence, persecution, and other inhumane acts such as denying food and other life-saving provisions.

This conclusion is based on testimonies from more than 120 Rohingya men and women who have fled to Bangladesh in recent weeks, as well as 30 interviews with medical professionals, aid workers, journalists and Bangladeshi officials.

Amnesty International’s experts corroborated many witness accounts of the Myanmar security forces’ crimes by analysing satellite imagery and data, as well as verifying photographs and video footage taken inside Rakhine State. The organization has also requested access to Rakhine State to investigate abuses on the ground, including by members of the Arakan Rohingya Salvation Army (ARSA), the Rohingya armed group. Amnesty International continues to call for unfettered access to the UN Fact-Finding Mission and other independent observers.

In the hours and days following the ARSA attacks on 25 August, the Myanmar security forces, sometimes joined by local vigilantes, surrounded Rohingya villages throughout the northern part of Rakhine State. As Rohingya women, men, and children fled their homes, the soldiers and police officers often opened fire, killing or seriously injuring at least hundreds of people.

Survivors described running to nearby hills and rice fields, where they hid until the forces left. The elderly and people with disabilities were often unable to flee, and burned to death in their homes after the military set them alight.

This pattern was replicated in dozens of villages across Maungdaw, Rathedaung, and Buthidaung townships. But the security forces, and in particular the Myanmar military, appear to have unleashed their most lethal response in specific villages near where ARSA carried out its attacks.

Amnesty International documented events in five such villages where at least a dozen people were killed: Chein Kar Li, Koe Tan Kauk, and Chut Pyin, all in Rathedaung Township; and Inn Din and Min Gyi, in Maungdaw Township. In Chut Pyin and Min Gyi, the death toll was particularly high, with at least scores of Rohingya women, men, and children killed by Myanmar security forces.

Amnesty International interviewed 17 survivors of the massacre in Chut Pyin, six of whom had gunshot wounds. Almost all had lost at least one family member, with some losing many. They consistently described the Myanmar military, joined by Border Guard Police and local vigilantes, surrounding Chut Pyin, opening fire on those fleeing, and then systematically burning Rohingya houses and buildings.

Fatima, 12, told Amnesty International that she was at home with her parents, eight siblings, and grandmother when they saw fire rising from another part of their village. As the family ran out of their house, she said men in uniform opened fire on them from behind. She saw both her father and 10-year-old sister get shot, then Fatima was also hit in the back of her right leg, just above the knee.

“I fell down, but my neighbor grabbed me and carried me,” she recalled. After a week on the run, she finally received treatment in Bangladesh. Her mother and older brother were also killed in Chut Pyin.

Amnesty International sent photographs of Fatima’s wound to a forensic medical expert, who said it was consistent with a bullet wound that “would have entered the thigh from behind.” Medical professionals in Bangladesh described treating many wounds that appeared to have been caused by gunshots fired from behind –matching consistent witness testimony that the military fired on Rohingya as they tried to run away.

Sona Mia, 77, said he was at home in Koe Tan Kauk when Myanmar soldiers surrounded the village and opened fire on 27 August. His 20-year-old daughter, Rayna Khatun, had a disability that left her unable to walk or speak. One of his sons put her on his shoulders, and the family slowly made its way toward the hill on the village’s edge. As they heard the shooting get closer and closer, they decided they had to leave Rayna in a Rohingya house that had been abandoned.

“We didn’t think we’d be able to make it,” Sona Mia recalled. “I told her to sit there, we’d come back… After arriving on the hill, we spotted the house where we left her. It was a bit away, but we could see. The soldiers were burning [houses], and eventually we saw that house, it was burned too.”

After the military left the village in the late afternoon, Sona Mia’s sons went down and found Rayna Khatun’s burnt body among the torched house. They dug a grave at the edge of that house’s courtyard, and buried her there.

Rape and other sexual violence

Amnesty International interviewed seven Rohingya survivors of sexual violence committed by the Myanmar security forces. Of those, four women and a 15-year-old girl had been raped, each in a separate group with between two and five other women and girls who were also raped. The rapes occurred in two villages that the organization investigated: Min Gyi in Maungdaw Township and Kyun Pauk in Buthidaung Township.

As previously documented by Human Rights Watch and The Guardian, after entering Min Gyi (known locally as Tula Toli) on the morning of 30 August, Myanmar soldiers pursued Rohingya villagers who fled down to the riverbank and then separated the men and older boys from the women and younger children.

After opening fire on and executing at least scores of men and older boys, as well as some women and younger children, the soldiers took women in groups to nearby houses where they raped them, before setting fire to those houses and other Rohingya parts of the village.

S.K., 30, told Amnesty International that after watching the executions, she and many other women and younger children were taken to a ditch, where they were forced to stand in knee-deep water.

“They took the women in groups to different houses. …There were five of us [women], taken by four soldiers [in military uniform]. They took our money, our possessions, and then they beat us with a wooden stick. My children were with me. They hit them too. Shafi, my two-year-old son, he was hit hard with a wooden stick. One hit, and he was dead… Three of my children were killed. Mohamed Osman (10) [and] Mohamed Saddiq (five) too. Other women [in the house] also had children [with them] that were killed.

After raping women and girls, the soldiers set fire to the houses, killing many of the victims inside.

On 3 October, the UN Operational Satellite Applications Programme (UNOSAT) reported that it had identified 20.7 square kilometres of buildings destroyed by fire in Maungdaw and Buthidaung Townships since 25 August. Even that likely underestimated the overall scale of destruction and burning, as dense cloud cover affected what the satellites were able to detect. 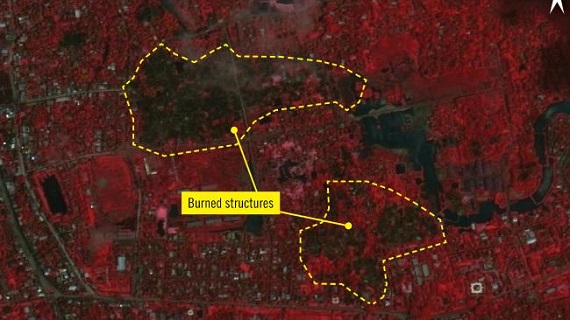 Amnesty International’s own review of fire data from remote satellite sensing indicates at least 156 large fires in northern Rakhine State since 25 August, also likely to be an underestimate. In the previous five years, no fires were detected during the same period, which is also the monsoon season, strongly indicating that the burning has been intentional.

Before and after satellite images strikingly illustrate what witnesses also consistently told Amnesty International – that the Myanmar security forces only burned Rohingya villages or areas. For example, satellite images of Inn Din and Min Gyi show large swathes of structures razed by fire virtually side by side with areas that were left untouched. Distinct features of the untouched areas, combined with accounts from Rohingya residents as to where they and other ethnic communities lived in those villages, indicate that only Rohingya areas were razed.

Amnesty International has noted a similar pattern in at least a dozen more villages where Rohingya lived in close proximity to people from other ethnicities.

“Given their ongoing denials, Myanmar’s authorities may have thought they would literally get away with murder on a massive scale. But modern technology, coupled with rigorous human rights research, have tipped the scales against them,” said Tirana Hassan.

“It is time for the international community to move beyond public outcry and take action to end the campaign of violence that has driven more than half the Rohingya population out of Myanmar. Through cutting off military cooperation, imposing arms embargoes and targeted sanctions on individuals responsible for abuses, a clear message must be sent that the military’s crimes against humanity in Rakhine State will not be tolerated.

“The international community must ensure that the ethnic cleansing campaign does not achieve its unlawful, reprehensible goal. To do so, the international community must combine encouraging and supporting Bangladesh in providing adequate conditions and safe asylum to Rohingya refugees, with ensuring that Myanmar respects their human right to return safely, voluntarily and with dignity to their country and insisting that it ends, once and for all, the systematic discrimination against the Rohingya and other root causes of the current crisis.”