Speaking to media SYFB leader Ranjit Singh (Damdami Taksal) said that the Punjabi language is either ignored or placed at third place, after English and Hindi, at Jallianwala Bagh memorial. He said that the named of those who were killed by the British colonisers in 1919 at Jallianwala Bhag are written  at a “Shaheedi Laat” raised in their memory only in English language. “There could be no justification for ignoring the native language of those who laid their lives while protesting or struggling against forceful occupation of their motherland by colonial rulers”, he added. 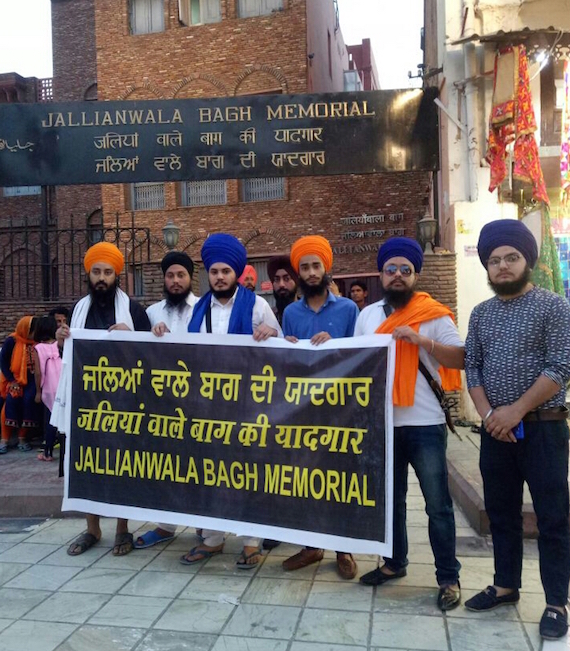 Besides holding the protest, the youth activists also submitted a memorandum to Mr. Mukharjee, the secretary of Jallianwala Bagh Memorial management committee, demanding the prominence to Punjabi language on all boards placed at the memorial.

Marginalisation of Punjabi is Not Limited to Jallianwala Bagh Memorial:

Denying proper status to Punjab language is not limited to the NHAI’s road side sign-boards or sign boards at Jallianwala Bagh Memorial, rather it is happening everywhere in the state- from central/state government owned sectors to institutional run by private entities.

Recently Punjab and Sindh Bank abrogated Punjabi as its official language and it was replaced with Hindi.

Indian Home Minister Rajnath Singh, during his recent visit to Chandigarh, declared that Punjabi could not be retained in Chandigarh, the capital city of Punjab which is a labeled as the Union’s Territory, as it was difficult to learn ‘each and every’ language.

Bank forms are available only in English and Hindi, not in Punjabi. Similar is the situation with other sectors and institutions.

The situation in education sector is even worse, where most of the private and even the Government owned modern schools have marginalised the mother tongue Punjabi even in the primary education.

Why this all is happening?

It is a well established fact that the process of pseudo “Nation-Building” takes toll of the native/regional languages, cultures and identities. The Indian State is working on to homogenise the Indian subcontinent under a single entity label of the “Indian Nation” therefore regional/native languages are being marginalised in a planned manner.

Though the situation is worrisome, there are positive signs also. People have been taking notice of efforts to marginalise their language. The social media had highlighted the arrest of a Punjabi lover who had black painted the signboards in Hindi and English in Chandigarh in order to protest against marginalisation of Punjabi language.

Recently, the resident of many villages in Bathinda black painted the NHAI sign boards demanding first place for Punjabi language. Many youth groups have emerged that are not only protesting against the attempts to marginalise the Punjabi language but are also making efforts to preserve and flourish Punjabi language.

These youth groups held a series of protests opposing marginalisation of Punjabi language in the state. Recently, various youth groups took out a drive on Bathinda-Amritsar highway to blacken the road-side sign boards in English and Hindi as the Punjabi language was placed at third place on these sign boards. The NHAI that had early refused to change the order of languages on the sign boards reportedly agreed to put Punjabi on first place after these protests.