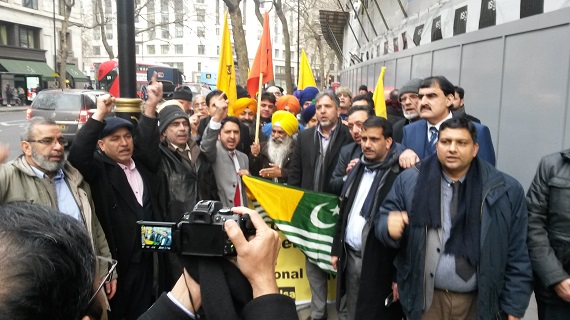 During his meetings between an Indian delegation, led by him and a delegation from the United Kingdom led by the Minister of State for Immigration Brandon Lewis, Minister of State for Home Kiren Rijiju reportedly conveyed India’s concerns on the continuing pro-freedom activities carried out by Kashmiri and Sikh activists in the UK that bear “serious repercussions on India’s sovereignty”, reads the quote from a report published in an English tabloid.

Additionally, while seeking cooperation of the UK Government in expediting India’s 13 extradition requests, the MoS (Home) also assured the visiting Minister of full cooperation on behalf of the Government of India in the extradition of Mohammad Abdul Shakur wanted in the UK on murder charges.

Mr. Lewis purportedly said that meetings between the Indian and UK Immigration Ministers have been formalized as a dialogue every six months and expressed hope that this will further strengthen the bilateral ties.

Further, drawing attention to the next Commonwealth Heads of Government Meeting (CHOGM) that will take place in London in April next year, Mr. Lewis sought India’s participation and support in making the summit a success.