New Delhi: Over 660,000 people across India have supported an Amnesty International India campaign in support of Rohingya refugees and asylum-seekers in India, and called on authorities to stop the proposed mass expulsion of an estimated 40,000 Rohingya people in India. 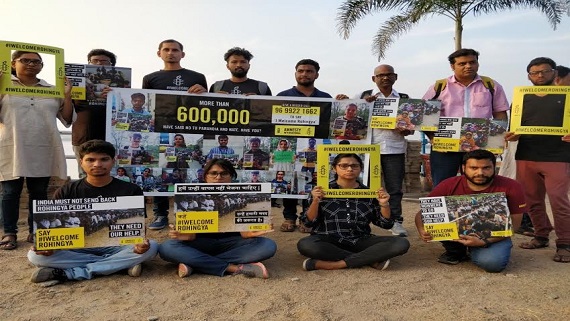 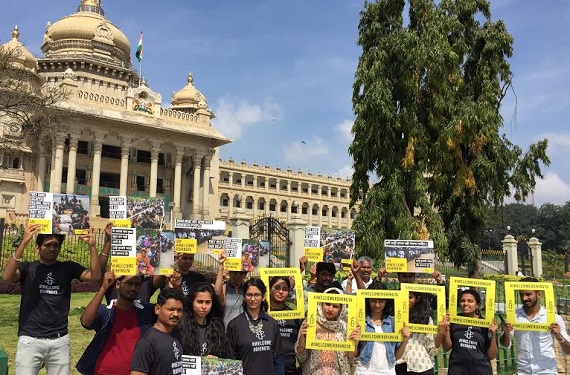 Another view of Activists supporting Rohingyas.

“Rohingya people are continuing to flee persecution in Myanmar, in what has become the world’s fastest growing refugee crisis. Forcibly returning Rohingya refugees to Myanmar—where they face ethnic cleansing—would not just be a violation of India’s obligations under international law, but also a blemish on India’s history of supporting those fleeing persecution,” said Aakar Patel, Executive Director, Amnesty International India.

“It is time for the Indian government to heed the voices of those who are calling on us to show that India cares for Rohingya refugees.”

Speaking about why India must care for Rohingya refugees, historian and writer Ramachandra Guha, who has supported the campaign, said, “India has a civilizational history of providing shelter to refugees of different religions. Our tradition compels us to help Rohingya people”.

The UN refugee agency has given identity cards to about 16,500 Rohingya people in India, but the Indian government does not officially recognize these people as refugees. In October, two Rohingya Muslim men filed a petition before the Supreme Court challenging the government’s decision to expel all Rohingya people to Myanmar. In response, the government said that all Rohingya people were ‘illegal immigrants’ whose continued stay in India would have serious national security ramifications. The petition will next be heard by the court on 21 November.

“India has expressed its commitment to protecting refugees at various international platforms and urged other countries to refrain from diluting the principle of non-refoulement, or forced return. Yet at home, the government is hypocritically adamant about forcibly returning Rohingya people to Myanmar, where they face serious human rights violations,” said Aakar Patel.

Forcing Rohingya asylum-seekers and refugees back to Myanmar would violate the international principle of non-refoulement – which is part of customary international law and is binding on India – that forbids states from forcibly returning people to a country where they would be at real risk of serious human rights violations.

India is also a state party to other international treaties under which it must comply with this principle, including the International Covenant on Civil and Political Rights and the UN Convention on the Rights of the Child.

Amnesty International’s analysis of the ongoing crisis “’My World Is Finished’: Rohingya Targeted in Crimes against Humanity in Myanmar” describes how Myanmar’s security forces are carrying out a systematic, organized and ruthless campaign of violence against the Rohingya population as a whole in northern.

Rakhine State in Myanmar. Witness accounts, satellite imagery and data, and photo and video evidence gathered by Amnesty International all point to Rohingya women, men, and children being the victims of a widespread and systematic attack, amounting to crimes against humanity.

On 21 November, Amnesty International will launch a new report which outlines how Rohingya people in Myanmar are trapped in a dehumanising system of discrimination and segregation.