New Delhi:  The Rohingya people in Myanmar are trapped in a vicious system of state-sponsored, institutionalised discrimination that amounts to apartheid, said Amnesty International today as it publishes a major new analysis into the root causes of the current crisis in Rakhine State. 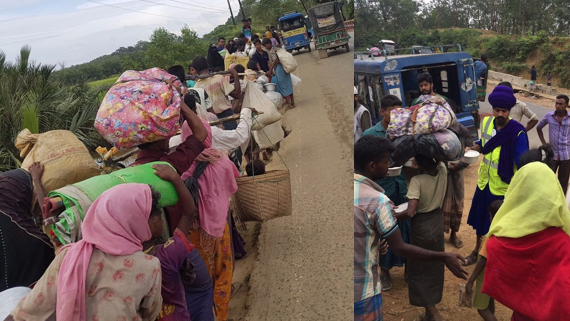 Images used for representational purpose only |

“Caged without a roof” puts into context the recent wave of violence in Myanmar, when the security forces killed Rohingya people, torched whole villages to the ground, and drove more than 600,000 to flee across the border into Bangladesh.

The two-year investigation reveals how authorities severely restrict virtually all aspects of Rohingyas’ lives in Rakhine State and have confined them to what amounts to a ghetto-like existence where they struggle to access healthcare, education or in some areas even to leave their villages. The current situation meets every requirement of the legal definition of the crime against humanity of apartheid.

“The Myanmar authorities are keeping Rohingya women, men and children segregated and cowed in a dehumanising system of apartheid. Their rights are violated daily and the repression has only intensified in recent years,” said Anna Neistat, Amnesty International’s Senior Director for Research.

“This system appears designed to make Rohingyas’ lives as hopeless and humiliating as possible. The security forces’ brutal campaign of ethnic cleansing in the past three months is just another extreme manifestation of this appalling attitude.

“Although these rights violations may not be as visible as those that have hit the headlines in recent months, they are just as horrific. The root causes of the current crisis must be addressed to end the cycle of abuse and make it possible for Rohingya refugees to return to a situation where their rights and dignity are respected.”

While Rohingya have faced systematic, government-sponsored discrimination in Myanmar for decades, Amnesty International’s investigation reveals how such repression has intensified dramatically since 2012, when violence between Buddhist and Muslim communities swept the state. 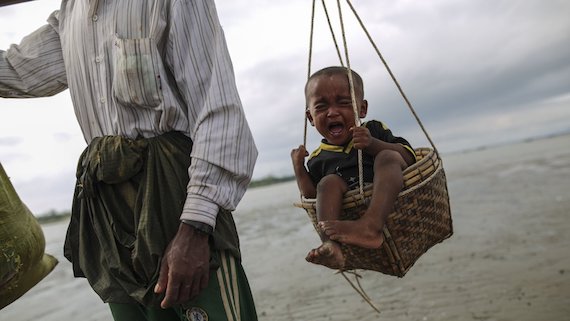 A Rohingya Muslim man, fled from ongoing military operations in Myanmars Rakhine state, carries his child with a basket attached to a wooden stick as they fled Bangladesh by boat over sea in Teknaff, Bangladesh on September 12, 2017. (Getty Images)

Rohingya in Rakhine State are essentially sealed off from the outside world and face severe restrictions on their freedom of movement that confine them to their villages and townships. These restrictions are put in place through an intricate web of national laws, “local orders” and policies implemented by state officials displaying openly racist behaviour.

A regulation in effect across Rakhine State clearly states that “foreigners” and “Bengali races [a pejorative term for the Rohingya]” need special permits to travel between townships. In northern Rakhine State, where the majority of the Rohingya lived until the recent exodus, even travel between villages is heavily restricted by a system of permissions. Arbitrary curfews have been harshly and continually imposed in predominantly Rohingya areas for the last five years.

In central Rakhine State, Rohingya are kept tightly locked down in their villages and displacement camps. In some areas they are not allowed to use roads and can only travel by waterways, and only to other Muslim villages.

For Rohingya who do manage to obtain permission to travel in northern Rakhine State, frequent checkpoints mostly staffed by Border Guard Police (BGP) are a constant menace, where they are regularly harassed, forced to pay bribes, physically assaulted or arrested.

One Rohingya man described witnessing such abuse when the bus he was travelling in was stopped by police: “There were four police in total, two of them beat the guys with a cane on their backs, shoulders and thighs. Another slapped the lady four or five times with his hand. […] After that they took them to the police station.”

While conducting research for the report, Amnesty International staff saw first-hand a border guard kicking a Rohingya man at a checkpoint, and documented at least one case of an extrajudicial execution, when BGP officers shot dead a 23-year-old man travelling during curfew hours.

A life on the brink of survival

While the quality of hospitals and clinics in Rakhine State is generally poor for all communities, Rohingya face serious and often life-threatening barriers in accessing health care.

Rohingya are denied access to Sittwe hospital, the highest-quality medical facility in Rakhine State, except for in extremely acute cases. Even then they require authorization from the Rakhine State authorities and travel under police escort. In northern Rakhine State, many see no choice but to travel to Bangladesh to access the health care they need, but this trip can often be prohibitively expensive for all but the wealthiest families.

One man in his 50s said: “I wanted to go to Sittwe hospital for medical treatment, but it’s forbidden, the hospital staff told me I couldn’t go to there for my own safety and said I needed to go to Bangladesh for treatment. It cost a lot of money. My brother has many paddy fields and oxen and he had to sell some of these to pay for the travel. I was lucky… most people cannot afford this, so they just end up dying.”

Outside of northern Rakhine State, only a few medical facilities are accessible for Rohingyas. There, they are kept in separate “Muslim wards” which are guarded by police. One aid worker compared one such ward to a “prison hospital”.

Several Rohingya described how they had to pay bribes to hospital staff and police guards if they wanted to call family members or purchase food from outside. Others avoided hospitals altogether – fearing abuses by doctors and nurses, or thinking they would not be offered care at all.

“Denying Rohingya access to medical care is abhorrent – we spoke to women who said they would rather give birth at home in unsanitary conditions than risk abuse and extortion at hospitals,” said Anna Neistat.

Since 2012, Myanmar authorities have tightened restrictions on Rohingyas’ access to education. In large parts of Rakhine State, Rohingya children are no longer allowed into previously mixed government schools at all, while government teachers often refuse to travel to Muslim areas.

With higher education largely off limits for Rohingya, many people Amnesty International spoke to expressed a sense of despair and hopelessness about the future.

Tightened restrictions on travel have also affected many Rohingyas’ ability to earn a living or to put enough food on the table. People selling produce have been cut off from trade routes and markets, while farmers are often prevented from working their fields. Malnutrition and poverty have become the norm among Rohingya in the affected areas, a situation the authorities have compounded by severely restricting humanitarian access.

“It is very challenging at the moment because we don’t have enough to eat. We would be better in jail or prison because at least then we would have food regularly. It is like we live in a prison anyway,” said one 25-year-old Rohingya man.

Underpinning the discrimination against Rohingya is their lack of legal rights in Myanmar. At the heart of this are discriminatory laws and practices, in particular the 1982 Citizenship Act, which have effectively denied citizenship to Rohingya on the basis of their ethnicity.

Amnesty International’s research also reveals how Myanmar authorities have engaged in a deliberate campaign to strip Rohingya of even the limited forms of identification they do possess. Since 2016, the government has made it extremely cumbersome for Rohingya to register newborn babies on “household lists” – often Rohingya families’ only proof of residence in Myanmar. Meanwhile, in northern Rakhine State, those who are not home for annual “population checks” risk being deleted from official records altogether. 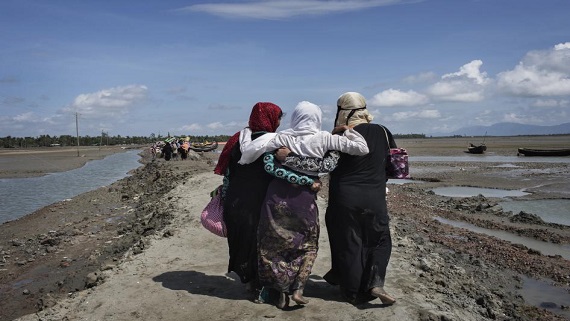 One consequence of this campaign is that it has become virtually impossible for Rohingya who have fled the country to return to their homes. This is particularly concerning since the military operations in 2016 and 2017 have driven close to 700,000 Rohingya to flee into Bangladesh, where they are living in refugee camps in desperate conditions.

Restoring the rights and legal status of Rohingya, and amending the country’s discriminatory citizenship laws is urgently needed – both for those who remain in the country and those who wish to return. Rohingya who have fled persecution in Myanmar cannot be asked to return to a system of apartheid,” said Anna Neistat.

Dismantling the system of apartheid

Amnesty International has, through a thorough legal analysis of this extensive body of evidence concluded, that the Myanmar authorities’ treatment of the Rohingya amounts to apartheid, defined as a crime against humanity under the Convention against Apartheid and the Rome Statue of the International Criminal Court.

Myanmar is legally obliged to dismantle the apartheid system in Rakhine State, and must also ensure accountability for those responsible for committing acts that amount to crimes against humanity.

“Rakhine State is a crime scene. This was the case long before the vicious campaign of military violence of the last three months. This abhorrent system of discrimination and segregation permeates every aspect of Rohingyas’ lives and unless there are immediate steps to dismantle it, it will remain in place long after the military campaign ends,” said Anna Neistat.

Authorities cannot rely on hollow arguments about the need for ‘safety’ or to combat ‘terrorism’ to impose further restrictions on Rohingya. The repression is unlawful and completely disproportionate. Crimes against humanity can never be justified – whether as ‘security measures’ or on any other basis.”

Background: What is apartheid?

Under the International Convention on the Suppression and Punishment of the Crime of Apartheid and the Rome Statute of the International Criminal Court, apartheid is defined as a crime against humanity covering a range of acts, committed in the context of an institutionalized regime of systematic oppression and domination by one racial group over any other racial group or groups and with the intention of maintaining that regime.

Specific acts committed in this context and criminalised as apartheid range from openly violent ones such as murder, rape and torture to legislative, administrative and other measures calculated to prevent a racial group or groups from participation in the political, social, economic and cultural life of the country and deny them basic human rights and freedoms. A clear example of where officials in Rakhine State have combined regulatory and violent acts is the extreme restrictions on freedom of movement on Rohingya, which constitutes the crime of “severe deprivation of physical liberty” as defined in the Rome Statute.