New York: An apparent majority of the United Nations (UN) member states has defied unprecedented threats by the US to declare President Donald Trump’s recognition of Jerusalem as Israel’s capital “null and void”.

The non-binding resolution was approved at a UN General Assembly emergency meeting on Thursday with 128 votes in favour and nine against, while 35 countries abstained. It passed despite intimidation by US president Donald Trump, who had threatened on Wednesday to eliminate financial aid to member states who would vote against his decision, while Nikki Haley, the US ambassador to the UN, had  warned  that she would be “taking names” of those countries, media reports said. 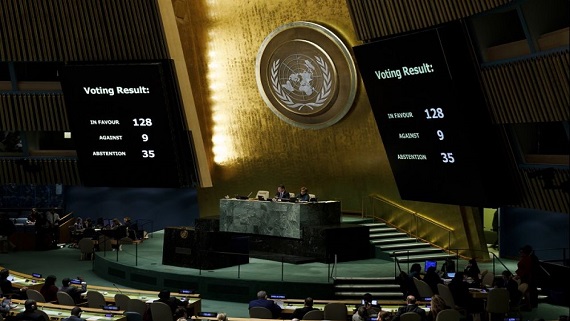 Screens showing the results of a United Nations General Assembly vote on a motion rejecting the US decision to recognise Jerusalem as the Israeli capital, in New York yesterday.

Shortly after the vote, Palestinian leaders called the vote a victory for Palestine and thanked the UN member states that rejected US President Donald Trump’s unilateral move “despite all the pressure exerted on them”.

“This decision reaffirms once again that the just Palestinian cause enjoys the support of international community, and no decisions made by any side could change the reality, that Jerusalem is an occupied territory under international law,” reads the statement of Nabil Abu Rudeina, spokesman for Palestinian President Mahmoud Abbas, published on the website of an English vernacular.

The city of Jerusalem which has been a bone of content from the last 70 years is claimed by both Israel and Palestine as their respective capital. The city is divided as east and west Jerusalem since 1948, but the East Jerusalem has been under Israeli occupation since  the Arab-Israeli War of 1967.  Since then the state of Israel has been building illegal Jewish settlement to change the demography of the Muslim majority other half of the holy city.

Only nine nine countries including United States and Israel voted against the resolution. The other countries which supported Washington and Tel Aviv were Togo, Micronesia, Nauru, Palau, Marshall Islands, Guatemala and Honduras.

Twenty-two of the 28 EU countries voted for the resolution, including the UK and France. Germany – which in the past has abstained on measures relating to Israel – also voted in favour.

Thirty-five countries abstained, including five EU states, and other US allies including Australia, Canada, Colombia and Mexico. Ambassadors from several abstaining countries, including Mexico, used their time on the podium to criticize Trump’s unilateral move, reports The Guardian.

Mohammad Javad Zarif, Iran’s foreign minister, also welcomed the result of the vote on Twitter,  calling it “a resounding global NO to Trump regime’s thuggish intimidation” at the UN.

For his part, Israel’s Prime Minister Benjamin Netanyahu, who had earlier called the UN a “house of lies”, condemned the “preposterous” vote and thanked Trump for his stance on Jerusalem, media sources reported.

“I do appreciate the fact that a growing number of countries refused to participate in this theatre of the absurd,” he further added to his statement.

Mevlut Cavusoglu, foreign minister of Turkey, a co-sponsor of the resolution, said on Twitter that “dignity and sovereignty are not for sale”.

Even India to whom the US dubbed as a “global power”, voted in favour of the resolution passed overwhelmingly in the United Nations General Assembly on Thursday which calls upon the United States to withdraw its decision to recognise Jerusalem as the capital of Israel, notes The Wire.

The session on Thursday at the 193-member body was held at the request of Arab and Muslim countries after the US vetoed the same measure in the Security Council on Monday. The US was outnumbered 14 to 1 in that vote. While the Security Council’s five permanent members – the US, Britain, France, China and Russia – had veto power on Monday’s vote, there are no vetoes at the General Assembly, reports Al-Jazeera.