London: British Prime Minster Theresa May on Friday, hailed the return of Britain’s classic blue passport as a benefit of leaving the EU, pleasing Brexit campaigners for whom it is a symbol of distinct identity and  sovereignty but attracting derision from many remainers. 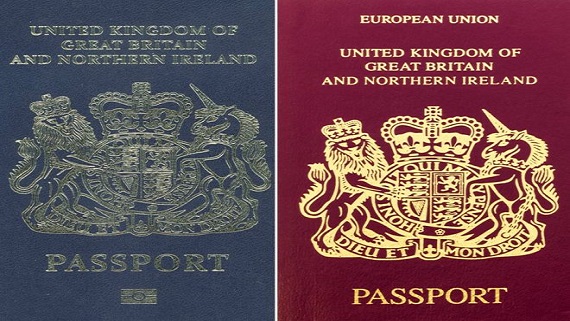 New passports from October 2019 will revert to the pre-1988 colour scheme.

The government reportedly said that a version of the old passport, issued to Britons from 1920 to 1988, when it was replaced by the burgundy jacket of the European Union, will be reintroduced after the country leaves the bloc in March 2019.

“The UK passport is an expression of our independence and sovereignty – symbolising our citizenship of a proud, great nation,” reads the purported quote from a tweet by PM May.

“That’s why we have announced that the iconic blue passport will return after we leave the European Union in 2019.”

Meanwhile, the opponents mocked their attachment to something superficial while arguing that Brexit would diminish Britain’s real standing in the world.

The new document, which will be issued from October 2019, will come with enhanced security features, immigration minister Brandon Lewis said, and will be introduced as old passports expire and at no extra cost to the taxpayer, media reports said.

Even people who voted remain still had an attachment to the dark blue passport, said Brandon Lewis while talking to BBC.

Responses to May’s tweet were overwhelmingly negative, however, with many Twitter issuers pointing out that Britain could have kept the old colour under EU rules, reports Reuters.