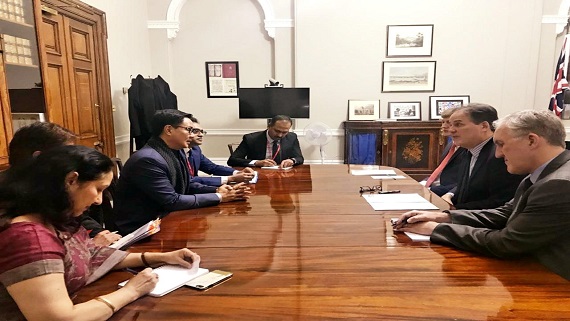 For example, the demand first became public in January 2006 when worldwide candlelit vigils were organised by the Sikh body in opposition to the imposition of the death penalty in India, support for Professor Davinderpal Singh Bhullar and the release of Sikh political prisoners.

The Sikh body has become a bone of content specially for leading human rights campaign in favour of Jagatr Singh Jaggi and criticizing Indian authorities and also campaigning for a Sikh homeland among the Sikh diaspora.

Hence there are undisclosed rules for engagement and invites to certain meetings and events when it comes to the Sikh Federation (UK) are in effect currently dictated by the Indian High Commission in London. In recent years the UK Government has however have actively engaged with the Sikh body as it, works on a wide range of issues and they further claim to have a public profile recognised by the mainstream media as well as significant support in the Sikh community.

Furthermore, it is maintained by the rights body that it led the legal challenge to have the ban lifted on the International Sikh Youth Federation (ISYF) that was removed nearly two years ago. They said that many politicians on all sides admitted the ISYF ban introduced in 2001 was illogical other than to appease the Indian authorities.

It was last week when the Indian Minister of State for Home Affairs, Kiren Rijiju accompanied by other representatives of the Indian government visited the UK and held meetings with several Ministers at the Home Office, Foreign Office and also met the new Conservative Party Chairman, Brandon Lewis.

When the meeting took place with Mark Field at the Foreign Office you can imagine the ‘restrictions’ imposed on Indian government officials visiting Gurdwaras across the globe in which the diaspora Sikh role has been so prominent would have featured.

The Indian authorities in particular are probably still wondering why the British Prime Minister, Theresa May went out of her way to specifically talk to the BBC about Jagtar Singh Johal on 20 November.

As the visit of the Indian Minister of State for Home Affairs came to an end last week a news item titled: “Consider banning Sikh Federation, India tells UK” appeared in The Tribune on 13 January 2018. This article uses an unnamed source, almost certainly the Deputy Indian High Commissioner, Dinesh K. Patnaik who attended the meeting with Ben Wallace, Minister of State for Security at the Home Office.  The Deputy Indian High Commissioner is seen sitting to the immediate right of Kiren Rijiju in the meeting at the Home Office.

“The Indian authorities are living in cloud-cuckoo land if they think the UK Government will ban the Sikh Federation (UK), especially after we had the ban lifted two years ago on the ISYF via a legal challenge.”

“We know for a fact the Indian authorities have tried in the last 15 years to get a ban on the Sikh Federation (UK) and have failed. Irrespective of the party in power the demand has always been rejected by the UK Government.  They should accept there is no chance for a ban of a legitimate organisation campaigning for Sikh rights.”

“We will continue to expose the RSS/Hindutva ideology that Narendra Modi and the present Indian government represents that threatens minorities and the stability in the Indian sub-continent.”

“We have operated for 15 years and the UK Government accept that we are strengthening the political voice of Sikhs in the diaspora and respect us for the work we do to protect and promote the distinct Sikh identity.”

“All sorts of tactics have and continue to be used by the Indian authorities to put obstacles in our way, but we continue to out manoeuvre them.”

“The Indian authorities can do what ever they want, but they will never stop us highlighting human rights violations in India, pursuing truth and justice for the 1984 Sikh Genocide and continuing our campaign for the right to self-determination and re-establishment of a Sikh homeland.”