London: As per the local media sources a shopkeeper of Punjabi origin in the UK bravely fought off three hammer-wielding robbers with cardboard boxes. In the CCTV footage, Raj Sandhu, 55, was seen battling the thugs in his shop, Maypole Stores, in Welford-on-Avon, Warwickshire, on Monday night. 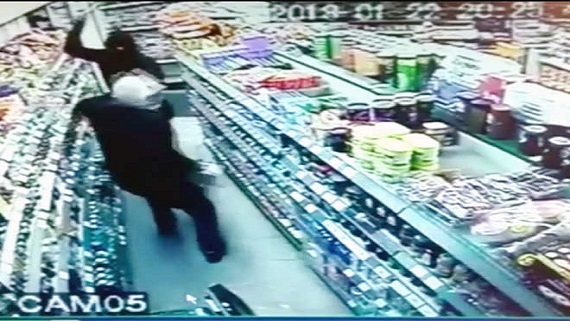 A video grab shows Raj Sandhu battling a robber in his shop at Warwickshire in the UK on Monday night.

Despite suffering bruises on the arm, he forced the robbers to flee with just some cash they could grab on the way out.

“It was gut instinct. I thought if I didn’t fight back, they would hit me over the head with it (the hammer),” reads the statement of Raj Sandhu given to a local English daily. “I was trying to get behind the counter as that is where the panic button is, but the vibrations (of what happened) set it off anyway,” he adds.

At that time Raj Sandhu was emptying the cash machine when the robbers barged into the shop, but their attention was focused on a post office safe housed in the shop. When they were unable to open that, they turned on the shopkeeper, who used the cardboard boxes around him to defend himself. Some of the cash from one of the boxes Sandhu was filling up spilled out on to the floor as the robbers took aim at him with a hammer, notes Coventry Telegraph in its report.

Furthermore, the robbers have been caught on the CCTV picking up cash off the floor and fleeing to get away in a dark-coloured Mercedes.

“We’ve been here (for) 25 years and have had break-ins, but nothing like this,” Raj Sandhu reportedly said in his statement.