Jaipur: After the Rajasthan police in September last year acquitted six persons belonging to ‘pro-hindutva’ Gau Rakshak (Cow Vigilantes) outfit accused of attacking and killing a Haryana based dairy farmer Pehlu Khan. The state police on January 24th booked Pehlu Khan and two of his  companions as accused and concludes that all three had indulged in ‘cow smuggling’ under state laws. 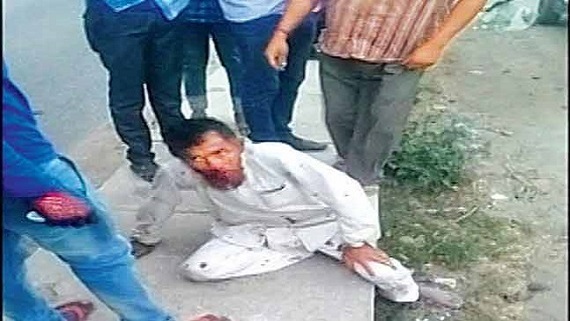 The chargesheet was filed by Alwar police in the court of the Behror additional chief judicial magistrate on January 24. The police had charged nine men with the murder of Pehlu Khan after identifying them from video footage of the lynching. The case is being tried in the court, but another investigation in September last year had cleared six others who Pehlu Khan named in the FIR as his assailants in his dying statement.

As reported by the media sources the chargesheet filed on January 24th names four as accused – Azmat and Rafique who are from Khan’s village, Jaisinghpur in Haryana, Arjun Lal Yadav who was driving one of the two pickup trucks that were attacked on April 1 and his father Jagdish Prasad.

Pehlu Khan and four others, among them his two sons, were returning from a cattle fair on Jaipur’s outskirts on April 1 and were headed to their homes in Haryana when they were attacked by gau rakshaks (cow vigilantes) in Alwar’s Behror. The gau rakshaks, calling Khan and his companions cattle smugglers, assaulted them. Pehlu Khan died two days later and a video documenting the lynching went viral.

“After completing the investigation and on the basis of statements of witnesses and evidence, offences under sections 5,8,9 of the Rajasthan Bovine Animal (Prohibition of Slaughter and Regulation of Temporary Migration or Export) Act, 1995 and Rules, 1995 stand proved against Azmat, Rafique and Arjun. Offences under Section 6 have been found proved against Jagdish Prasad,” reads the quote from the reported chargesheet.

“We didn’t get any documents…That’s why they have been found guilty of smuggling cows,” said Head Constable Harun Khan from the Behror police station, who is the investigating officer while interacting with the media.

“Is this justice? We were attacked and beaten up by the mob, and now we have been made the accused. I have the valid purchase receipt issued by the Jaipur Municipal Corporation. At the time of the purchase, nobody told us we needed additional permits,” reads the statement of Azmat,  who has been bedridden for several months after Alwar lynching, published in an English daily.

“I sustained injuries in the spinal chord as a result of the beating. More than Rs. 1 lakh has been spent on treatment and now we are paying for court expenses by mortgaging our belongings. We don’t know what to do.”

Azmat and Rafique said they had no work and it had become increasingly hard for their families to earn money. Arjun Lal Yadav, who was driving one of the trucks that were attacked, has spent money on not just hospital bills but on repairing his vehicle, which was damaged in the attack, media reports said.

“I know that I have got a second life because I managed to run away when they attacked us. More than Rs 1.5 lakh was spent on repairing the truck and even now the papers of the vehicle are with the police. Now, I don’t know how I will manage to pay for the court expenses,” Arjun Lal Yadav said while interacting with Indian Express (IE).

“Shouldn’t there be people from the government at the cattle market in Jaipur to complete all the paperwork after purchase of the animals? The people who gave us the purchase receipt knew we were from Haryana and would take the animals out of the state. Yet, we weren’t told about any additional paperwork,” Azmat further added to his statement.