Bridgewater, NJ: The Sikh Research Institute (SikhRI) has released its second report in the State of the Panth series, inquiring into the community issues related to the ceremony of Anand Karaj. Titled Anand Karaj: The Sikh Marriage, the report is already available for download on SikhRI’s website for free.

Upon the release of the report, the Chair of SikhRI’s board Jaswinder Singh Chadha shared his vision for the State of the Panth series: SikhRI is doing an eye-opening job of tackling major issues that young Sikhs are asking us. It provides research-based answers to very important questions — such as ”Who is a Sikh?” or “Who can get married as per Sikh Anand Karaj?” — from Gurbani and history.

“The research captures the views of a broad cross-section of self-identified Sikhs. This is unique and perhaps the first series of research-based reports published by a Sikh organization. We hope that this will encourage Sikhs to learn and respect views of those who think differently. I am confident that many young Sikhs and non-Sikhs will see Sikhi in a new light, the one based on research and facts”, he said. 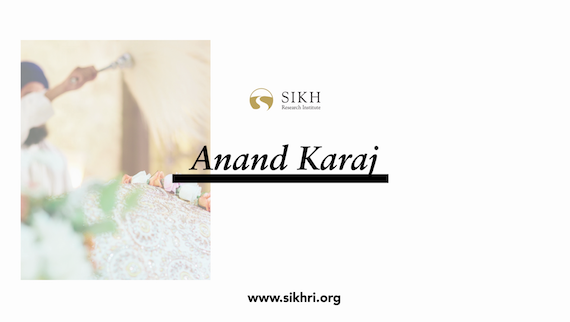 Anand Karaj: The Sikh Marriage explores the issues of acceptance of the Anand Karaj ceremony in South Asia and beyond on social and organizational levels. It reflects the ongoing discussions around who has the right to participate in the Sikh marriage ceremony, especially where inter-caste, inter-race, and sexuality come into play, added he.

The 30-page report takes a Gurmat (the Guru’s Way) angle in the debate, as inferred from Bani (wisdom), Tavarikh (history), and Rahit (lifestyle). It features a survey of close to 1,000 self-identifying Sikhs and includes their stance on divisive points of view that circle around the community.

Besides the direct benefits of creating a more accurate perception for what concerns self-identifying Sikhs all over the world, the research we are doing for the State of the Panth series allows us to grow collectively, establish connections and roots on a global scale.

The survey results enlighten and even surprise. For example, in spite of a widespread perception of castes being a factor in Sikh marriage, only 7% of respondents felt they had any weight in the decision.

Certainly, the report shows a clear need for education from a Gurmat lense to create a Sikh understanding around marriage. To that extent, Anand Karaj: The Sikh Marriage makes recommendations on personal and organizational levels, aimed at closing the gap between the arguing sides.

The report serves as a reminder that the importance of participating in Anand Karaj comes as a unique initiation into married life for Sikhs, through which they join a sovereign tradition that was built on equality, humanity, and spiritual simplicity, a SikhRI statement reads.