Jalandhar: Calling it a state-sponsored genocide of Sikhs, the Dal Khalsa claimed that the Nov 1984 killings started after Rajiv Gandhi was sworn-in as Prime Minister of India on 31st Oct along with four cabinet colleagues at 6.45 pm. 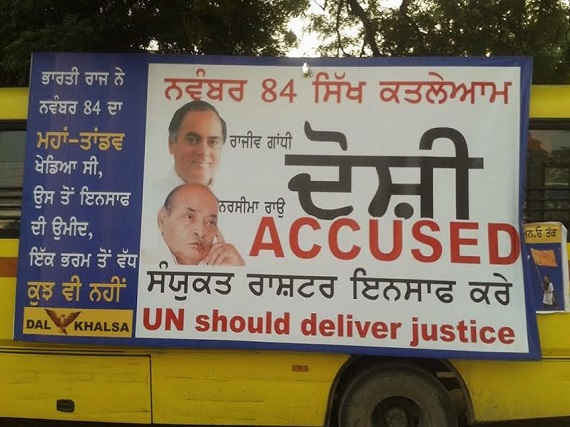 Party spokesperson Kanwar Pal Singh countered Punjab CM’s claim that Rajiv Gandhi was away from Delhi and that he had no role in the killings of Sikhs. He said its pity that  Amarinder Singh was siding with mass murderer’s hence rubbing salt on the wounds of aggrieved Sikhs. “To remain on CM chair, Amarinder has stooped too low”, he said.

Whilst replying to Amarinder Singh’s claim he said its common knowledge that all the organs of the then government of India played tactical role in engineering the killings of 2733 Sikhs (official figures).

Quoting former president Pranab Mukherjee from his book “The Turbulent Years 1980-1996”, the Dal Khalsa leader said Rajiv arrived at hospital at3.15 pm before the official announcement of the death of Indira Gandhi. “To avoid any confusion we decided that both Rajiv’s appointment as PM and Indiraji’s death should be announced simultaneously”, writes Ex-President.

Moreover, a person of Rajiv Gandhi stature doesn’t need to be physically present to engineer the killings of thousands of Sikhs, he pointed out while countering Amarinder Singh.

Furthermore, Kanwar Pal Singh sought intervention of United Nations for credible investigation into the November 1984 pogrom and trail of Rajiv and Rao posthumously. He slammed SAD (Badal) president Sukhbir Badal for seeking investigation into the role of Rajiv Gandhi by BJP led Indian government, to which his own party is part of it.

“Badals are in the illusion that they could continue to fool the people. They are expecting justice from those (read BJP), whose hands are dipped in the blood of innocent Muslims of Gujarat”, he said. He is of the believe that only the UN led international probe could unearth the exact role of the then hastily anointed Prime Minister Rajiv.