Bengaluru: As the date of release for the controversial film Nanak Shah Fakir is approaching the Sikh anger against the movie has begun to erupt form different places. As the opposition to the film had emerged as a strong wave in Punjab and there were reports that the Punjab government had decided to ban the screening of the film in Punjab, the film producer reportedly announced to skip Punjab while releasing his film on April 13.

But the opposition of the film is growing stronger at other places also. Sikhs in Delhi got the posters of the film removed from various cinema halls in Delhi and told the Cinema owners and management to not to screen the film which violates basic tenets and pious of the Sikh Panth. 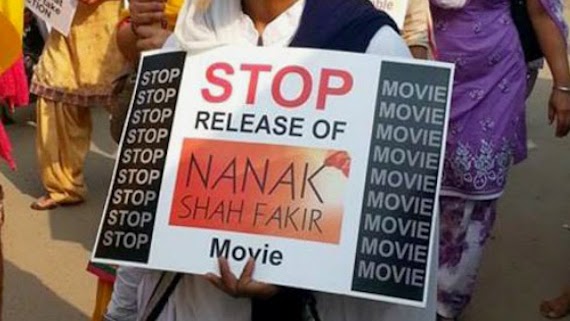 After holding discussions the Sikh sancta of Bengaluru asked the local Sikh bodies to take up the matter of Nanak Shah Fakir film at appropriate forums. Gurudwara Management of Sri Guru Singh Sabha ,Ulsoor, Bengaluru today informed the Sangat that representatives of Gurudwara Management Committee have approached Home Minister of Karnataka and handed over a letter urging him to stop the release of controversial movie “Nanak Shah Fakir” in Bengaluru.

On behalf of the Sikh sangat the Gurdwara Management representatives personally handed over to the Office of Police Commissioner, Bengaluru and management of several Cinema halls where movie is suspected to be released, local sources told Sikh Siyasat News (SSN).

Any formal announcement from the side of government or the administration was awaited. But it has been noticed that there are no listings of cinemas for this movie yet for Bengaluru on online ticket booking portals.

Gurdwara Sri Guru Singh Sabha president S. Parabjoth Singh Bali said: “Sikhism is a monotheistic religion which believes in One Formless God and which strictly prohibits all kinds of idol worship with a clear message of adherence to the teachings of the Gurus as enshrined in Guru Granth Sahib”.

“One man, sadly a Sikh is adamant on changing all this through his ill-conceived movie, Nanak Shah Fakir, slated for release worldwide on 13 April, 2018. The film producer Harinder Singh Sikka despite being made aware of his blasphemous movie which shows Guru Nanak Ji and Bebe Nanki in personal form, has filed to see reason so far”, he said while adding that “[l]et it be know that since last six centuries, no such personification of the Sikh Gurus has taken place.

The letters issued by representatives of the Gurdwara, on behalf of the Sikh sangat (copies available with the Sikh Siyasat News), tells the theatre managements, Karnataka government, police and civil authorities to not to screen the controversial film.