DAVIS, CA (Reported by OFMI): Sikh students at University of California, Davis held a candlelight vigil on the evening of April 24 to demand justice for Asifa Bano, an 8-year-old girl who was gang-raped and strangled near Kathua in Jammu and Kashmir.

A group of students from the association joined Organization for Minorities of India (OFMI) members to light candles in memory of Asifa. Displaying her picture, the students observed a moment of silence before discussing the crime.

“Asifa was a Muslim child from a nomadic community who was taking her family’s horses out to pasture when she was abducted by a group of degenerates in January,” explains Bhajan Singh, Founding Director of OFMI, who attended the vigil. 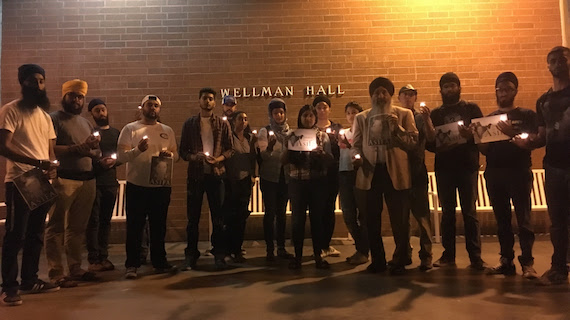 “She was confined in a temple for several days, gang-raped, strangled to death, and her body dumped in a field like trash. The powerless child’s body showed signs of torture. But instead of calling for justice, the Indian State and its affiliates are rallying to support the killers. Rape has a long history of use by Hindutva elements as an instrument in Delhi 1984, Gujarat 2002, and Odisha 2008”, he added.

Eight people have been arrested so far. Sanji Ram, a retired government official who is described as “the main conspirator,” owned the temple in which Asifa was violated. Two police officers are arrested for accepting large bribes in exchange for attempting to destroy evidence.

Police report their investigation has proven the motive behind the crime was to terrorize Asifa’s community, nomadic Muslims known as Bakarwals, and drive them away from the region. Her father, Mohammad Yusuf Pujwala, told The New York Times, “But we have land here and life here. This is home for us.”

According to Talib Hussain, a Bakarwal community leader and attorney, Sanji Ram is locally known for leading a campaign against the Bakarwals. “When I was young, I remember the fear Sanji Ram’s name invoked in Muslim women,” says Hussain. Even Asifa’s burial became a point of communal conflict. According to Hussain, “Baton-wielding goons appeared at the graveyard asking us not to bury her there, as that way the land would permanently remain with the Muslims.”

The crime gained international attention in April after a mob of lawyers ganged together to block police from filing charges against the accused. Subsequently, two State Ministers — Lal Singh and Chandar Prakash Ganga — participated in a rally defending the accused. Both are affiliated with India’s ruling party, the Hindu nationalist Bharatiya Janata Party (BJP). The lawyer for the accused, Ankur Sharma, has been encouraging further action by the Hindu Ekta Manch, a group formed to protest demands for justice for Asifa.

“It is my request to you that you should further strengthen this Hindu Ekta Manch and strengthen these meetings and rallies,” Sharma told attendees at a rally in February. Speaking about the Bakarwals, he stated, “They will destroy us (Hindus). They have hatched a conspiracy against us…. Shouldn’t we be ready to pick up arms for this? … They want to make us feel that we are weak.”

Meanwhile, Deepika Rajawat, the attorney for Asifa’s family, reports that she is facing constant rape and death threats. “I don’t know till when I will be alive,” said Rajawat on April 18. “I might be raped, my modesty may be outraged, I may be killed, I might be damaged. I was threatened yesterday…. I am not scared, but I am not feeling safe either. Protesters (lawyers) are trying to put pressure on me so that I don’t fight for justice. But I will continue to fight her case.”

Commenting on the situation, OFMI spokesperson Arvin Valmuci parallels the Kathua rape case to the 2002 pogroms against Muslims in Gujarat.

“The butchers who shed the blood of innocent Muslim victims during the Gujarat Genocide were especially noteworthy for their use of extreme sexual violence as a tool to subjugate the minority community,” remarks Valmuci. “Gang-rape was a central feature of the violence. These powerful people are interested only in perpetuating their power, which is particularly symbolized by their embrace of the caste system, and oppressing the vast majority of the common people. They stop at nothing to maintain their oppression of the Mulnivasi Bahujan. Justice is so hard to come by, which is illustrated in the recent acquittal of Maya Kodnani, the former BJP Gujarat State Minister who led one of the bloodiest pogroms in 2002. Corruption runs to the very core, the powerless are made the playthings of the powerful, and voices like that of the innocent baby Asifa are shamelessly snuffed out without the slightest hint of remorse.”