SAN JOSE, CA: “The arc of history in America and in the world is changed by you individuals coming together,” said Dominic Caserta, a city councillor from neighboring Santa Clara, as he took the loudspeaker during an April 29 candlelight vigil for Asifa in San Jose, California.

Asifa Bano, an eight-year-old girl living near the city of Kathua in Jammu and Kashmir, India, was abducted in January. Held captive in a Hindu temple, she was gang-raped for days before she was strangled to death. Her body was discovered dumped in a field. The crime has provoked international outrage, particularly after attorneys in Kathua attempted to block police from filing charges against the accused by rallying outside the Chief Judicial Magistrate’s office on April 9. Subsequently, two State Ministers from India’s ruling party, the Hindu nationalist Bharatiya Janata Party (BJP) — Lal Singh and Chandar Prakash Ganga — participated in a rally defending the accused. 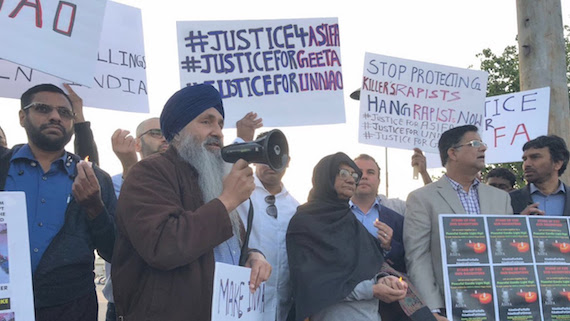 “We stand for all,” said Paramjit Kaur Khalra at the vigil. Speaking on behalf of Khalra Mission Organisation, she promised, “We will continue to fight for all.” 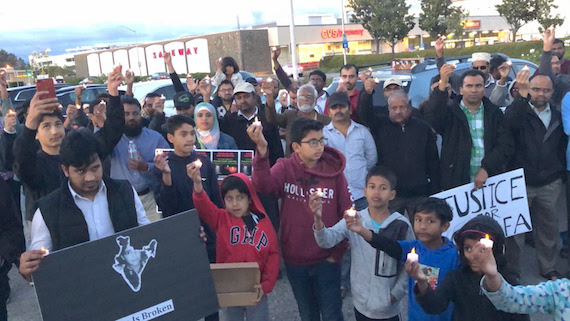 Karthikeyan Shanmugam, a representative of Ambedkar King Study Circle, spoke about the need to uplift socially and economically oppressed people. He argued that Hindu nationalist ideology is oppressing the majority of India’s population. “Hindutva says that they are in favor of the majority of the Hindus,” said Shanmugam. “That is how they are selling their ideology. Is it true? No? They are for the minuscule of the section of the population, the Brahmanical and the upper class.”

Councillor Caseta praised the vigil participants. “Your passion and your love for your community is unheralded,” said Caseta. “The energy that you have here will ripple effect not only in Santa Clara and California, but also in India as well.” Referencing his own two-year-old son, he continued, “It is unacceptable that any of our most precious resource, our children, are taken advantage of. We need justice…. Not only eight-year-old girls, but all of our children should be protected at all times. We are a country and a world of rule of law and safety.”

Vigil participants chanted slogans such as “we want justice for Asifa” and “one, two, three, four, kick Hindutva out the door” as they held signs reading “stop hate killings in India,” “women, girls, in infants, minorities…. none are safe in India,” “in India, cows are safer than our daughters,” and “make India safe for our daughters — vacate Hindutva looters.” Women balanced babies in their arms as they displayed signs to traffic and children in sweatshirts braved the cold to lift candles for Asifa. Participants included Tamils, Punjabis, Ambedkarites, Bangladeshis, Palestinians, and others. Also present was Mr. Khalid Azam of Indian American Muslim Council.