Chandigarh: Sikh intellectuals and academicians assembled at the call of ‘Sikh Vichaar Manch’ here severely criticised the Punjab School Education Board (PSEB) for presenting the Sikh history and culture in new books for eleventh and twelfth classes from ultra-Hindu Nationalistic perspective and urged that State government to immediately replace them with books carrying comprehensive and unadulterated Sikh annals.

The assemblage at the campus of Kendri Sri Guru Singh Sabha campus demanded that the Board should reconstitute an ‘expert committee’ with overwhelming presence of Sikh historians to recast the history syllabus for plus ‘one and two’ classes. 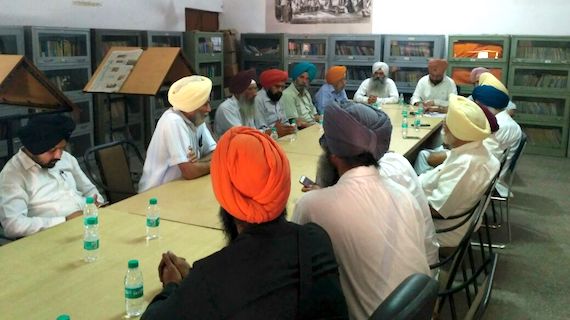 After long deliberations, the Sikh thinkers adopted a resolution which accused the outgoing Akali-BJP government in Punjab for initiating a project of ‘saffornizing’ of the Sikh history on the pretext of reshaping the history syllabus as per NCERT guidelines. In the process, the Sikh history was severely pruned, constricted and reshaped to fit in ultra-nationalistic frame-work. The PSEB books not only presenting the Hindu mythical literature like Mahabharata and Ramayana with all rituals as historical developments, but they have been given the myths an equal weightage to brave deeds of Sikh soldiers and warriors who had made unparallel sacrifices, changing the course of Indian history.

With an intent to dilute the Sikh identity, the history syllabus committee of the PSEB did not include any Sikh historian. But to cover up its hidden agenda it roped in the SGPC, the Sikh religious body and it sent a professor from religion department of Punjabi University Patiala to attend meetings of the syllabus committee.

The meeting said instead of exposing the hidden agenda of the preceding Akali-BJP government pertaining to distortion of the Sikh history, the Congress has rather lent support to that agenda by saying the latter only implemented the project which the previous government had sent rolling.