Chandigarh: A day after the Haryana Chief Minister Manohar Lal Khattar said that he has written a letter to Punjab Chief Minister Capt. Amarinder Singh to take steps to control the flow of unused water of Ravi river, the later issued a statement today urging the Central Government of India to build dams in Himachal Pradesh for this purpose.

Haryana Chief Minister had asserting claims over waters of Ravi river in his statement by saying that ‘being divertible,  this water should instead be utilized for the benefits of the people of the “partner States”. Surprisingly, Capt. Amarinder Singh’ statement released by CM office today does not say a word in this regard. 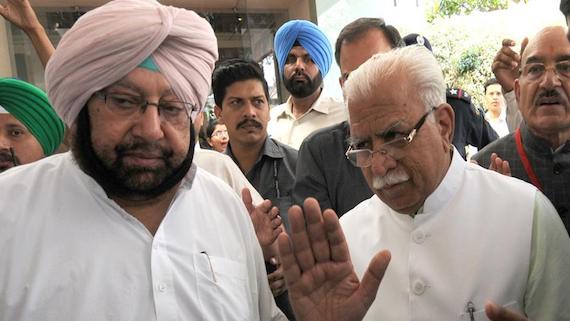 It may be recalled that Haryana, Rajasthan and Delhi are non-riparian state in relation to the rivers of Punjab but the Central government of India has made extra-legal and extra-constitutional arrangements to allocate the river water of Punjab to Haryana, Rajasthan and Delhi. Due to forceful allocation of Punjab’s river water to these non-riparian state, Punjab is facing severe water crisis as state’s ground water table to depleting at an alarming rate and majority of blocks in Punjab as overexploited in terms of use of ground water.

Full Statement issued by Punjab CM’s Office is being reproduced as follows:

Chandigarh, May 7: Punjab Chief Minister Captain Amarinder Singh has urged the Centre to take the lead in ensuring optimum harnessing of the Ravi-Beas waters, suggested the constitution of a technical panel of experts to work out ways to restrict the flow of water from Punjab into Pakistan.

Responding to media queries here on Monday, the Chief Minister said he had not yet received the letter purported to have been written by his Haryana counterpart Manohar Lal Khattar on the issue but made it clear that his government would take every possible step secure more water for the state.

Pointing out that melting of ice leads to rise in the water levels in the three rivers of Ravi, Beas and Satluj, causing it to flow into Pakistan, Captain Amarinder said he had written to Union Water Resources Minister Nitin Gadkari suggesting storage of the excess water in dams in Himachal Pradesh to check its flow into Pakistan. He had further suggested that all the stored water be controlled in Himachal Pradesh, said the Chief Minister, stressing the need for the central government to take the initiative in the matter.

Further, a High Powered Steering Committee for implementation of National Projects, chaired by Secretary (Water Resources, River Development and Ganga Rejuvenation), constituted a team comprising officers of Central Water Commission and Irrigation Department, Government of India on March 3, 2017, to visit the site of proposed Second Ravi Beas Link Project and submit a Feasibility Report. The team visited the site on December 5, 2017 and observed that harnessing the waters of Ravi was in national interest, and from among Ravi, Beas and Sutlej rivers, the greatest scope for utilization of unharnessed waters was in Ravi and technical feasibility of transfer of water from Ravi to Beas needed to be ascertained.