Toronto: Gathering in Toronto on May 12 for the local release of Captivating the Simple-Hearted: A Struggle for Human Dignity in the Indian Subcontinent, a diverse set of speakers praised the work as phenomenal, unique, and contemporary.

Dr. Manisha Bangar of Hyderabad, India, the former Vice-President of both All India Backward and Minority Communities Employees Federation (BAMCEF) and Mulnivasi Sangh, remarked, “This phenomenal work is really a labor of love.” Describing how the book depicts “almost a history of 2,000 years,” Dr. Bangar said, “History, right from 500AD until 1800 and something, was the dark ages of India. In that, the light was shone at the time of Guru Nanak Dev Ji. The entire Sikhi movement which flowed from him for 600 years following is something which has dispelled the darkness. This particular book comes to us as a torchlight to bring hope to us in our present struggle for reclamation of human dignity.”

Released in March 2018, Captivating is by Pieter Friedrich and Bhajan Singh. Explaining why he and Singh wrote the book, Friedrich said, “Our goal in producing this book was to create something which is accessible, succinct, digestible. Something which is useful to the common person in portraying the history of the Sikh people in big picture context of India.” 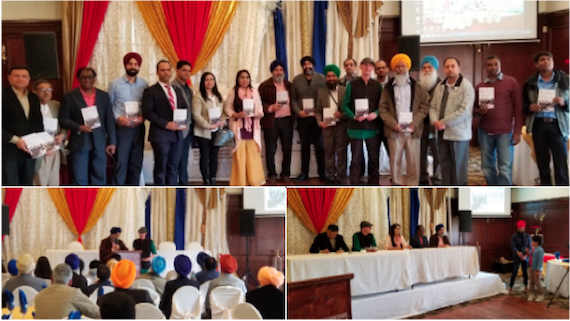 Suthamalli Ganga, speaking as a representative of Ambedkar Association of North America (AANA), said, “This is a contemporary book.” Expanding on his comments, he added, “Contemporary means it tells you the past history plus the modern thing. It basically resonates. I was actually counting the number of references. It’s more than 200 books. Please, spread this book. It’s a must.”

“This particular book, it’s about two main forces,” said Bangar. “There have been two main streams of consciousness always alive in the Indian subcontinent. One is the Brahmanical, traditionalist, exclusionist stream of consciousness — another is a Shramanic, egalitarian, thought-provoking, and incusionist stream, countering the caste system, varna system, scriptures, idolatry, and the medium of worship being through the Brahman.”

Mahesh Wasnik, the co-founder of AANA, spoke about traveling from his home in Nagpur to study in Nanded — both cities in Maharashtra. “I came to know about Sikhism when I was about 18 years old when I went to Nanded to do my engineering,” said Wasnik. “That was the place of Shri Guru Gobind Singh Ji. Of course, I used to take the langar also, because at that time I was a student.”

“Captivating compiles all our history, 2,500 years back to Buddha’s time,” continued Wasnik. “It tells about the Buddha’s time, and then all the ten Gurus, then Dr. Ambedkar, and, of course, Mahatma Phule, Periyarji. It’s about what our social reformers did, from the north to south, as one community of India. All the social reformers are there. Then the authors ask the question of what are we going to do next? That’s what this book is going to tell us. What is next?”

Friedrich explained, “We wanted to write a book allowing readers to comprehend how crucial the history of the Sikhs was to the development of the entire history of the subcontinent. We especially wanted to focus on how Sikhi, from its origins, deliberately and intentionally aligned itself with the lowest of the low. That is, how Sikhi worked to uplift the downtrodden people and to proclaim and protect the human dignity of all, regardless of race, religion, gender, color, creed, ethnicity, or caste. In fact, one of our central goals in writing this book was to explain how Sikhi originated, among other things, at its core, as an anti-caste movement.” According to Bangar, Captivating presents the rise of Sikhism as “exclusively the movement of the majority of the people of the country who were from a shramanic, egalitarian, incusionist tradition.”

“Despite our religion, we all are human beings,” said Wasnik. “What we need is equality. We need the liberty. We need the fraternity. Ambedkar Association of North America launched the same book at our Michigan event on the 127th Ambedkar Jayanti. These literatures only keep us alive.” Bangar also emphasized the universality of the book, saying, “We have Kabir, Ravidas, Guru Nanak Dev, Namdevji in the beginning. It was a movement started from Maharashtra and Karnataka which spread upwards. It was the strongest and most lively after the time of Buddha. Why was it lively? Because Guru Nanak did it not only in the form of precept, but in the form of example. And that is what has been the tradition of all the Gurus.”

“It could have been just any other book,” concluded Bangar. “What does this book do uniquely? This particular book is in a very simplified language and, also by quoting the most recent and most contemporary examples, it presents all this humanism, this radicalism, this anti-casteism, this anti-Brahmanism, and this example of universal brotherhood. It shows how the entire Brahmanical structure used to look down upon Punjab because that is where the intermixture of so many ethnicities took place, that was where original thought took place, that was the place where Sufism came up, that was the place where Sikhism came up. It shows how Sikhism was against the hierarchical, traditionalist, suppressive thought which was already existing. It’s a Mulnivasi Bahujan thing.”

After the book launch, Bangar joined co-authors Friedrich and Singh at Scott Library in York University to present the book, along with a bouquet of flowers, to a bust of Dr. Bhim Rao Ambedkar. Posing with a copy of Captivating, the group drew attention to a plaque on the bust which featured Ambedkar’s quote, “Education is something which ought to be brought within the reach of everyone.” Singh commented, “Our book is written in honor of Dr. Ambedkar’s legacy of reaching out to the simple-hearted people who need education.”

Singh then read a passage from Captivating which describes the conflict between Buddhism and Brahmanism — the ideology of supremacy of Brahmans, the highest caste in the Hindu caste system. “Gautama Buddha traveled and taught throughout eastern parts of the subcontinent; his philosophy took deep root and flourished for a time,” read Singh. He explained how Buddhism was uprooted from the subcontinent by Brahmanical philosopher Adi Shankaracharya, who destroyed or seized control of Buddhist temples.

Alluding to what he termed the “unholy alliance between the Bharatiya Janata Party and the Akali Dal,” Singh added, “It has been a long time since Sikhs have had control over their Golden Temple. It has been a long time…. We must read our history. We must have the courage to stand up for what is ours. And we want to prevent any further uprooting. We are not being rooted out of our temples now. They want to root out our bodies, our souls, our minds, our knowledge. We are going to have the courage to stop it by coming together as brothers and sisters, learning about the common bond, the one family, the one thought that we all came from.”