Milpitas, CA, USA: On May 20, communities of immigrants from the Indian sub-continent from throughout California gathered to protest a “Cow Culture” conference at the India Community Center in Milpitas, CA which featured Indian Member of Parliament Subramanian Swamy. 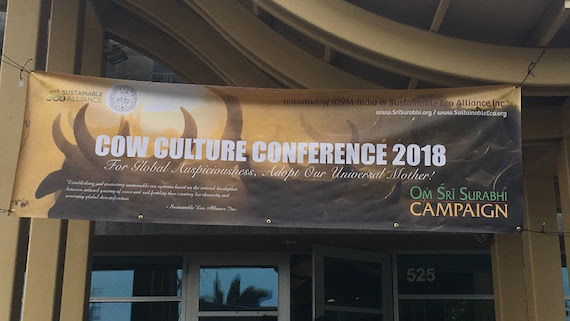 Protestors who gathered outside the India Community Center claimed that “cow culture” is being used a political tool to coerce minorities. “Dalit and Muslim people stand here with our Bahujan brothers and sisters saying ‘enough is enough with this violence,’” declared Thenmozhi Soundararajan at the protest. Soundararajan, who is President of Ambedkar Association of North American, led the group of approximately 40 protestors in chants of “No more lynchings, no more rapes, Hindutva is a culture of hate.” 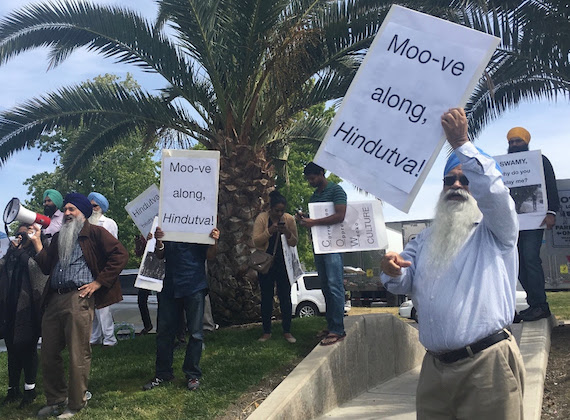 The United States Commission on International Religious Freedom reports that the BJP embraces “an ideology of Hindutva, which holds non-Hindus as foreign to India.” The BJP achieved central power in India in 2014, with Narendra Modi as Prime Minister. In 2017, Swamy praised Modi’s work with the Rashtriya Swayamsevak Sangh (RSS), the parent organization of the BJP, stating, “If you peel off his exterior, it is all Hindutva.” Explaining the BJP’s victory, Swamy said, “We articulated this Hindutva — of uniting the Hindus and dividing the minorities.” 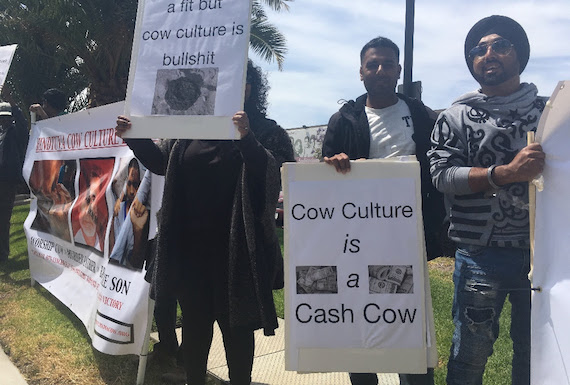 A view against Cow Culture Conference in California

Inside the conference, Swamy praised the benefits of cows. “Milk, urine, the gobar — excreta — is converted into fertilizer, pesticide, as well as bricks for building huts,” said Swamy. “So here is an animal which gives you everything. Why is that you want this to be killed?” He said people do not have the right to eat what they want, stating, “In India, there is no such thing as an absolute fundamental rights to anything.” Demanding that India pass a national law criminalizing cow slaughter, he added, “Anyone killing a cow should be prosecuted for murder.” 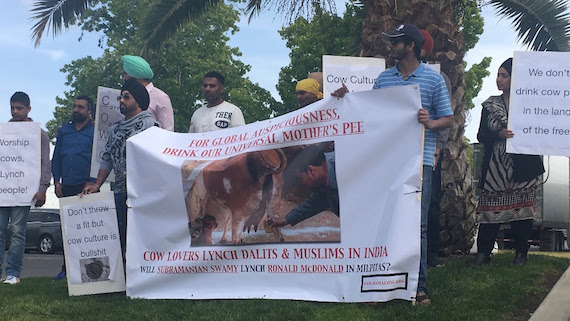 Outside, protestors chanted, “Cow culture has got to go. Cow culture is hatred.” They displayed signs and banners, including one featuring a photo of Mohammed Ikhlaq underneath the tagline, “Hindutva cow culture lynches.” Ikhlaq was a Muslim who was dragged from his home in Uttar Pradesh on the night of September 28, 2015 and beaten to death on suspicion of possessing beef. Citing a 2017 report by IndiaSpend, a public interest journalism website, the banner also stated, “Since 2010, 97% lynchings by ‘cow protectors’ happened after Modi’s 2014 victory.”

Expressing concern that “Hindu Sharia law” is coming to the United States, several protestors took to a bullhorn to deliver short speeches. “We love India,” said Zafar Haq. Speaking on behalf of the Indian American Muslim Council, he continued, “India is our country. We cannot let Hindutva claim their share and say that, ‘We will drive you out.’ They cannot tell us that the cow is a deciding factor for life and death for so many Muslims. Just yesterday, in Madhya Pradesh, an innocent Muslim man was lynched and killed for allegations that he had beef in his house.”

“Subramanian Swamy is the big culprit who is behind the policy of killing Muslims, killing minorities, and he’s coming here to demand more killing of the minorities,” warned Jaswant Singh Hothi of Milpitas Gurdwara. “We are here to send him a message that we will not put up with what he is doing. Cow culture is a culture of rape, it’s a culture of hate, and we will not put up with this. We pledge to galvanize the Sikh Sangat of the Bay Area against this Hindutva.”

Sandeep Singh of Turlock Gurdwara called the conference “an RSS program,” adding, “Cow culture is against American values of liberty and equality.” He joined in chants of “RSS, go away.” Other slogans raised by the protestors included “RSS out of America,” “Hey, hey, ho, ho, Hindutva has got to go,” and “Hindutva out of India.”

Inside the conference, leaders of Hindu Swayamevak Sangh (HSS) — the international affiliate of the RSS — took the podium before Swamy gave his keynote speech. “Thank you very much for giving me the opportunity to speak at the cow conference which is so needed, especially in a country like the US,” said Ajay Singhal. Sanjay Tripathi, assuring the conference that HSS stands ready to provide “whatever is needed,” claimed, “The god came to serve cow.”

Meanwhile, a few conference attendees stepped outside to engage protestors.

One large white man dressed as a swami walked up to the protest, saying, “My friends.” He quickly turned to anger, however, and began screaming, “One cow is equal to a thousand humans.” As he was escorted away by fellow conference attendees, protestor Bhajan Singh remarked, “This is the cow culture.” Singh continued, “You saw his violent attitude. If this is the cow culture that is coming in America, where they’re going to come and attack you like that, it’s a scary thought for all of us.”

Narayan Higgins, manager of Hawaii-based Krishna Cow Sanctuary, briefly engaged in debate with Soundararajan. “If the Hindutvas are as bad as you say they are, they will destroy you for acting like this,” said Higgins. “They actually are killing our people,” replied Soundararajan. They were then joined by Sriramadas Brs, the Continental Coordinator (Asia) of OSSC, who told Higgins, “We need to go.” Higgins replied, “I was just trying to talk with them.” Sriramadas quickly escorted Higgins away. Protestors then began chanting, “Hey, hey, ho, ho, Brahmanism’s got to go.”

Delivering remarks from a bullhorn, Singh declared, “They have successfully fooled the world into declaring from the United Nations October 2nd as a Nonviolence Day. They then decided that wasn’t enough. They then said they will declare International Yoga Day, which is now being celebrated all over the world. Guess what’s coming next? International Cow as Our Universal Mother Day…. We do not want the universal cow mother day. I respect my mother. If I called my mother a cow, she would slap me.”

“Subramanian Swamy is Hindutva in a cow mask,” remarked Arvin Valmuci, a spokesperson for Organization for Minorities of India (OFMI). “The Bahujan Mulnivasi people of India are being oppressed and persecuted by Hindu supremacist elements who politicize cow worship and use it as a pretext for violence.”

Laws in 21 of India’s 29 states criminalize the slaughter of cattle to one degree or another. Violence related to cow protection has been a feature of Indian society for a long time, but the country has undergone a massive spike in incidents since 2014. IndiaSpend, which conducted the first statistical analysis of cow-related attacks and lynchings, documented and analyzed all reported incidents since 2010. “Of 63 attacks recorded since 2010, 61 took place under Mr. Modi’s government,” reported IndiaSpend.

Further data analysis reveals several shocking trends. Of 28 people killed, 24 were Muslim. Out of 63 attacks, 32 victims were Muslim, five were Dalit, and one was Christian. In 13 of 63 attacks, police pressed charges against the victims. In 23 of 63 attacks, the attackers were identified as members of Hindu nationalist groups. Of 63 attacks, 32 occurred in states governed by the BJP. Finally, 2017 has seen a 75% increase in attacks versus the same period in 2016.

Commenting in March 2018, Karnataka Home Minister Ramalinga Reddy accused the BJP of holding a double-standard by only seeking a ban on the slaughter of cows. “If they want to ban, let them ban everywhere and all animals,” said Reddy. He added, “They say that they will ban cow slaughter if they come to power in Karnataka, while our country exports cow meat, beef to other countries. It has been four years since they came to power. Why have they not stopped these exports.”