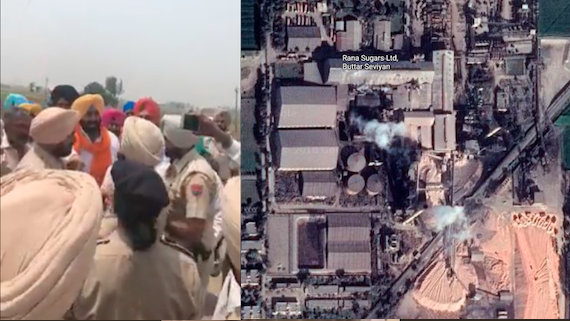 Sukhpal Singh Khaira and others being prevented by the police to visit the drain site (L) | A Google Maps earth view of Rana Sugars Ltd. Buttar Seviyan (R)

Sukhpal Singh Khiara has been maintaining that Rana Sugars Limited, a mill that is owned by former irrigation minister Rana Gurjit Singh’s family, was discharging effluents in the drain that enters the Beas river.

Police claims that Sukhpal Singh Khaira and others were not allowed to reach the drain in order to avlid a clash.

Sukhpal Khaira added, “The National Green Tribunal (NGT) has issued a notice to the mill. Due to the release of effluents, residents are suffering from cancer, hepatitis, blindness and lung diseases. Rana Sugar Mill has also dug up bores of more than 500-feet inside factory premises.”

Factory owner, Rana Partap Singh, who is a nephew of Rana Gurjit, said, “I challenge Khaira to prove even one of the charges”. He claimed that Sukhpal Khira’s allegations were part of malicious campaign. He added that he would welcome PPCB inspecting the factory.

Punjab Chief minister Captain Amarinder Singh issued a written statement today criticising Sukhpal Singh Khaira for allegedly trying to force his way into he factory. “Khaira’s trespass bid was a violation of the law, with the potential to trigger violence,” he said.