Chandigarh: Crisis with the Aam Aadmi Party (AAP) continues to deepen. The internal rift and power struggle with Punjab unit of AAP is wide open once again. After Sukhpal Singh Khaira’s alleged support for “Referendum 2020”, from which he has already retracted, even party’s Punjab leadership has come out against him. AAP state leadership issued a statement distancing from his alleged support for so-called referendum.

♦ ALSO READ: PUNJAB’S SUBEDARI ASPIRANTS PRETEND TO ENGAGE AGAINST EACH OTHER WITH SHARED AIM OF HITTING AT THE IDEA OF SIKH INDEPENDENCE

Sukhpal Singh Khira accused state unit chief Dr. Balbir Singh for issuing statement without even consulting him but according to Dr. Balbir Singh it was Sukhpal Khaira who had not attended his phone calls. 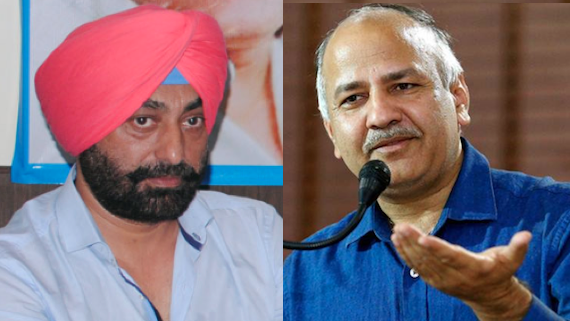 There are reports that AAP’s central leader Manish Sisodia snubbed Sukhpal Singh Khaira over the issue and told Punjab leadership to focus on party work. Reacting to it, NRI units of the Aam Aadmi Party (AAP) have stepped in to support Sukhpal Khira. Party’s NRI leadership has issued an open letter (copy available with Sikh Siyasat News) to Manish Sisodia.

Full Text of the Letter reads:

We NRI teams, would like to inform you that we are very saddened to see whatever is happening within AAP Punjab Leadership. On one hand, you all are together in Delhi and protesting together against Central Government but in Punjab our leaders have been targeting and fighting with each other.

As you might have seen his recent interviews about the referendum, he clearly mentioned again and again that he is an Indian, and he believes in Constitution of this country but we need to retrospect what led to this situation that Sikhs are considering these actions. He raised the question which was for whole Sikh leadership, mainly Badals who have been in power in Punjab for so many years and falsely promised the justice to people again and again. It is very sad to see that instead of supporting Mr. Khaira’s question, our own leaders went against Khaira and started chaos on media openly against Khaira.

We would like to inform you that we all are standing with Mr. Sukhpal Khaira on this issue. And, we are also very upset with Mr. Balbir Singh the way he handled the situation. He showed his immaturity to be a Punjab level leader first, by going against Khaira without knowing full situation and then even worse by putting Mr. Khaira’s personal phone number on Social Media.

Second, as a Co-convener he leads the Shahkot elections, even with hard work of Volunteers we got only 1900 votes because he went against all our main leaders Khaira, Bhagwant Mann, and others to fight these elections his own way. And, when Mr. Sachdeva asked him let’s have a meeting and do some introspect for this poor performance, he fired him as Doaba Incharge and tried to put Dr. Ravjot as Doaba Incharge which he didn’t accept. As of today, we do not have any Doaba Incharge and he appointed MLA Jai kishan Rodi as an observer. This is also a big failure of Mr. Balbir Singh.

In addition to that, few weeks ago, the audio recording of Garry Birring was leaked and was posted on social media. As you know the context of his call, where he was using very foul language against our MLA’s, Khaira and other leaders, no action has been taken by the committee made by Mr. Balbir Singh. This is another example of Balbir Singh’s incapability for being Punjab Co-Convenor.

On one side our new youth team is making good progress by meeting volunteers and people and trying to raise the graph of our party in Punjab and on other side people like Balbir Singh is damaging the image of party in public and media.

We are requesting you to please remove Mr. Balbir Singh from the Co-Convenor position without any further delay and take strict disciplinary action against him also. Please choose someone who is capable and experienced to become a Punjab Convenor, if not, then please make a PAC committee of Punjab.

Also, we are requesting that as we have 3 Raj Sabha MPs now and they each can spend Rs. 25 Lacs per year from their MPLAD fund anywhere out of their state, we demand that Rs. 75 Lacs from all three MPs should be spent in Punjab every year and help our MLAs with their constituencies.
Hopefully, you will consider our letter very seriously and take some suitable action soon. With