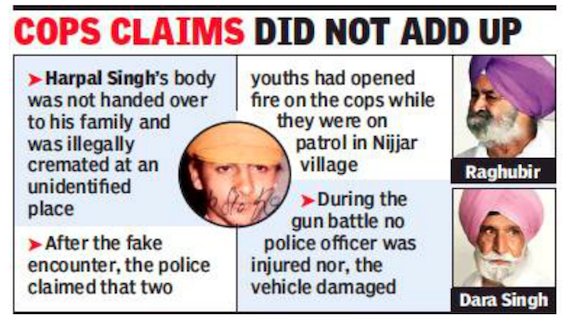 The police had claimed that two persons were coming near Village Nijjar and on seeing the police party that was petrolling there with CRPC duo started firing on the police party. Police claimed that the firing took place for 20 minutes in which the police fired 217 cartridges and after the firing stopped in the search operation it was found one boy whose name was Harpal Singh was killed. The court found that none of the allegedly used 217 cartridge were collected by the police party and deposited in the Malkhana, no ammunition records were deposited in the Malkhana, non of the police officers in the said encounter sustained any injury not there vehicles at the spot were damaged. The court found that the police story about the encounter was false.

The CBI court convicted Raghubir Singh, the then SHO Beas and S.I Dara Singh, under section 302, IPC and sentenced to life imprisonment. Three other accused police officers are acquitted. Ram Lubaya, the main accused died during the trial and was facing other similar cases of fake encounters.

It is notable that Indian security forces, including Punjab police, were indulged in wide-spread and systematic human rights abuses in 1980s-90s. Enforced disappearances, custodial torture and death, fake encounters were common policing practice during that period.

Jaswant Singh Khalra, a human rights activist had unearthed a wide-spread practice of systematic extra-judicial killings and secret cremations of innocent Sikhs, including youth as well as aged men and women. Jaswant Singh Khalra had presented documentary evidence, cremation ground record, to establish the fact that the security forces were killing Sikhs in fake encounters and their dead bodies were being secretly cremated as ‘unidentified/ unclaimed dead bodies’. Jaswant Singh Khalra had to lay his life for unearthing these abuses as he was also subjected to enforced disappearance and was killed secretly by the Punjab cops.
The Supreme Court of India (SCI) and National Human Rights Commission (NHRC) of India have recognized the fact that at least 2097 extra-judicially killed Sikhs were cremated in three cremation grounds – Durgyana Mandir, Tarn Taran and Patti. Near kin of victims were granted some compensation in these cases but the guilty cops were not proceeded against.

Except some specific cases, the human rights abuses in Punjab largely remain uninvestigated and the culprits are enjoying powerful positions, which is evident from the fact that Punjab police chief himself is facing serious charges of human rights violations – including murder of innocent persons.