The office bearers of the organization met to deliberate on the current political situation of the state in the backdrop of India-Pakistan agreeing to build Kartarpur corridor, Hindu extremist groups baying for Sidhu’s blood, Badals enacting drama for the atonement of their sins besides trampling of human and fundamental rights in India.

Dal Khalsa spokesperson Kanwar Pal Singh said the language of violence has become a central feature of Hindutva politics. He said Hindutva elements were bringing the communal cauldron to a boil through sensational slogans and rhetoric’s”. 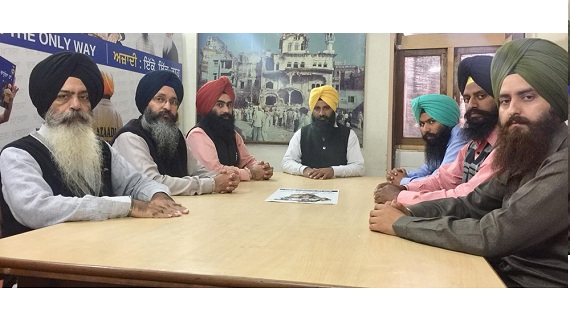 Whether we like or dislike Sidhu for his political leanings or his association with Congress is a different matter, but as far as his role in making corridor dream turning into reality is concerned, the Sikhs appreciate his efforts. “The Sikh people know how to effectively deal with unscrupulous elements that use foul language or threatens their co-brethren, warned Dal Khalsa members.

With a view to lending voice to the “victims of state repression, especially those who were made to disappear and subsequently eliminated in a stage-managed encounter, the organization decided to hold a protest march and a sit-in in Bhatinda on December 10 to mark the 70th World Human Rights Day.

In a statement, party general secretary Paramjit Singh Tanda said that the motive of the protest march was to revive the dying hopes of justice for the sufferers of state repression.

Singh pointed out that during the last one year, under one pretext or another but ostensibly with the same-old reason of curbing militancy in Punjab, there have been a string of arrests and illegal confinements of Sikh youth in Amritsar and surrounding areas after Nirankari grenade attack. Others present include Ranbir Singh and SYP head Paramjit Singh Mand.