Accra, Ghana: Ghanaians made history this week when they tore down a statue of Indian icon Mohandas Gandhi.

Installed on the University of Ghana campus in June 2016 during a state visit by then Indian President Pranab Mukherjee, the statue immediately provoked outrage from students and faculty who protested that Gandhi was racist towards black Africans. Pointing to the 21 years that Gandhi spent working as an attorney in South Africa, they claimed he repeatedly made racist remarks, campaigned for racial segregation, and even volunteered to participate in a war against African freedom fighters. In the words of Dr. Obadele Kambon, a professor at the university’s Institute of African Studies, “The start of institutional apartheid there in South Africa was because of Gandhi.” 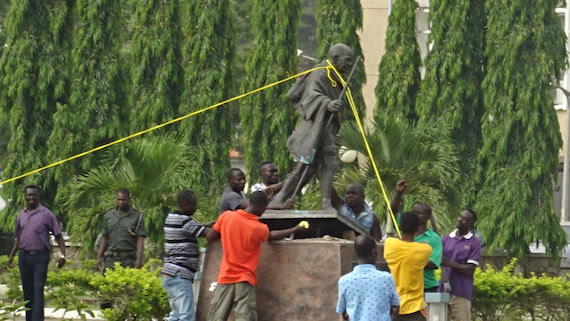 In October 2016, the government agreed to remove the statue. However, the Ghana Gandhi statue remained in place until December 12, 2018, when, according to sources at the university, it was toppled “somewhere after 9AM.” Pictures of the removal show workers tethering ropes to the statue to pull it down as the base cracks away from the pedestal on which it stood. News reports indicate that the statue was taken to the Republic of Ghana’s Ministry of Foreign Affairs. Its final resting place remains unknown. 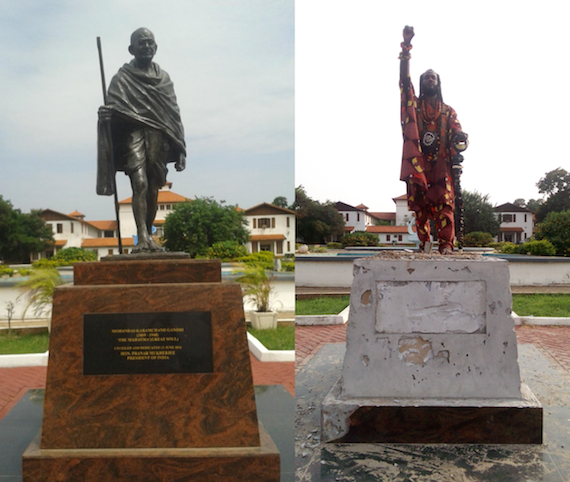 “We hope this Gandhi statue will be relegated to the rubbish bin,” says Arvin Valmuci, a spokesperson for Organization for Minorities of India (OFMI). “From this point in history, Gandhi’s visage should only ever be displayed to tell the story of the suffering of the African people, expose the villains, and commit ourselves to never again countenancing such criminal acts of prejudice as were perpetrated by this ardent racist. This is a truly historical moment. We will not stop pushing until the #GandhiMustFall movement goes global and we see Gandhi’s statues toppling on every continent.” 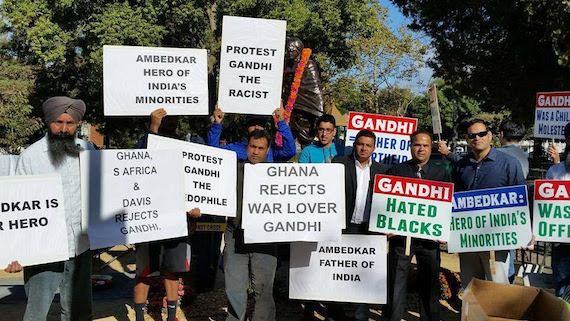 Commenting on the removal of the statue, Dr. Kambon remarks, “This is part of a greater movement for black dignity and self-respect throughout the world. The same as the National Anthem protest in the U.S., the same as #RhodesMustFall in South Africa and Oxford, the same as the protests of black students who are beaten and stabbed daily there in India by those who consider themselves upper-caste Indo-Aryans.”

With hope in his voice, Kambon adds, “Black self-respect is on the rise. In addition to that, what this means is that we have more people who care about black dignity and black self-respect than those who would like to trample on our dignity and self-respect.” However, he suggests the struggle continues as he references “our colleagues there in Malawi, who did a court injunction” against a proposed statue in the Malawian city of Blantyre.

The Malawi Gandhi statue, which has not yet been installed, has also provoked outrage. Soon after learning of the proposed statue, Malawians launched a petition opposing it and, in October, filed a lawsuit to block its installation. A high court in Malawi granted an injunction prohibiting construction from continuing until Judge Michael Tembo reaches a final decision. His decision is expected sometime this month.

Pieter Friedrich, an analyst of South Asian affairs, thinks there is more than meets the eye when it comes to the issue of Gandhi’s statues. “These statues have been used as propaganda tools by the Indian State for decades,” says Friedrich. “The combination of Gandhi’s self-promotional autobiography, glamorization of Gandhi by the Congress Party, and mythologizing of Gandhi by Hollywood created an ahistorical, saintly, and white-washed figure that the Indian government loves to use a mask to conceal its atrocious human rights record. People look at India, think of Gandhi, and then think of peace instead of looking at India and thinking of caste, torture, or pogroms against minorities. Deconstructing the mythical Gandhi is central to exposing the truth about human rights conditions in modern India.”

Bhajan Singh, the founding director of OFMI, says the human rights advocacy group initiated some of the earliest protests against Gandhi after reading books by G. B. Singh, a former colonel in the U.S. Army. “It was Gandhi: Behind the Mask of Divinity and Gandhi Under Cross-Examination, books by Col. Singh, which first ignited this crisis that has now developed into a global agitation,” says Singh. “Since 2010, OFMI has staged protests against Gandhi statues. We have stopped installation of several proposed statues, but the statue in Ghana is the first one ever to be removed.”

Singh was joined by a number of other demonstrators at a protest in San Francisco on October 2, 2010, which marked Gandhi’s 141st birthday. As reported by The San Francisco Chronicle:

A group billing itself as the Organization for Minorities of India plans to protest today to demand the removal of the bronze statue of Mohandas Gandhi that has sat in the plaza behind the Ferry Building since 1988.

Up until this point, about the only adversity the statue has faced has been people swiping the trademark circle-rimmed eyeglasses (at least four times) and the indignity of a roosting seagull or pigeon.

But the group – which says it was formed four years ago to publicize the oppression of Christians, Buddhists, Dalits, Muslims, Sikhs and other Indian minorities considered to be on the lowest rungs of the Hindu caste system – says Gandhi was a racist who harbored violent urges.

“The popular image of Gandhi as an egalitarian pacifist is a myth,” Bhajan Singh, one of the organizers, said in a statement. “We plan to challenge that myth by disseminating Gandhi’s own words to expose his racism and sham nonviolence.”

The group plans to present Ferry Building management with a demand to remove the statue and ask for it to be replaced with one of either Martin Luther King Jr. or low-caste Dalit leader B.R. Ambedkar.

When the government said that they would take the statue away, it was clear that it was a move to make everything die down because people were very incensed and angry about this. Some even took [Gandhi’s] spectacles. When I looked a few weeks ago, someone had thrown mud at this statue. So in terms of the timing, we haven’t got any communication from the government or the university about why now. So I’m not equipped to answer that question.

But all I can say is that I’m very happy that this is taking place right now because what this means is a triumph of black dignity and self-respect over those who don’t care about any of those things.

Gandhi duped many great people, as a matter of fact, because it was until 1999 or thereabouts that all of his collected writings were available. So he was writing in Hindi, he was writing in his native Gujarati, in addition to what he wrote in English — the autobiography and things of that nature. So all of these people who say, “oh, wow, he is so great” — you have to put him in context of who was he in relation to black people and in relation to African people.

So this is someone who we have to understand that, even if he was great for his own people — meaning the upper-caste Hindus — that he was someone who was terrible to black people throughout his entire life. Both during his time in South Africa and then when he went to India he fought tooth and nail against the aspirations of the Dalits — the black Untouchables of India. Which is why to even this day, black people, African people, Nigerians, Ghanaians are there and they are beaten every day. There was a Congolese man who was beaten to death in broad daylight in India. Why? Because he gets the same treatment as the indigenous black Dalits of India.

So this is something that we have to understand. There’s a saying that, if a lie takes a thousand years to go on a journey, truth will catch up to that lie in a die. So all of these lies about Gandhi get proliferated just because people didn’t know. If you mention Mandela, if you mention Martin Luther King, if you mention Nkrumah Kwame — all these people didn’t have the opportunity to research and read his words about black people in his early life and his later life and the consistency of it. If they had that opportunity, they would have taken a different stance.

But myself, as a researcher, I am a research coordinator of African Studies, so I’m paid by the Ghanaian people to do research. I’m not guessing about Gandhi, I’m not guessing about what he stood for. I’ve read his works. I’ve read all of these different collected works of Gandhi, and books on him, and what Dr. Ambedkar said about him in What Gandhi and the Congress Have Done to the Untouchables. So me, I’m very well-informed. So anyone who has this information and comes to a different conclusion, it means that they don’t mean well for black people. But most people just are uninformed and they do not know.

He did good things, if you want to call them good, for his upper-caste. When he wrote to the British, he said that the Indo-Aryans come from a common stock and that they are partners in the colonization of black people. This is what he stood for. He stood for his caste, the Bania caste, which is those who are the traders, which is a sub-group of the Vaishyas.

But we have to again understand this. It’s not only what he said or what he wrote. He actually was a Sergeant-Major fighting against the Zulus in a war in which thousands and thousands of Zulu people were killed. He wanted to get guns. He agitated to get guns. It was only that the British didn’t consider him to be good enough to get the guns.

So we have to understand not only the words but his actions. Look at how he argued in order to separate the post office and the telegraph office there in Durban. How many people are aware that he did that? This is really, when we think about it, you can look at this as the start of institutional apartheid there in South Africa was because of Gandhi. He wanted a different entrance so he wouldn’t have to go through the same entrance as the Kaffir.