Lucknow/Chandigarh: The Yogi Adityanath-led BJP government in Uttar Pradesh has drawn flak from All India Riot Victim Relief Committee (AIRVRC) for not submitting the affidavits regarding the status report on the massacres of 127 Sikhs in Kanpur during the 1984 Sikh Genocide.

Speaking to media in Lucknow on Friday, AIRVRC chairman Kuldeep Singh Bhogal said the delay in submitting affidavits will also delay the justice to the families. “Families of the victims have been waiting for justice for the last 34 years. After Congress leader Sajjan Kumar was convicted in Delhi recently, more people, especially the Sikhs in Kanpur, have become hopeful of justice,” he said. 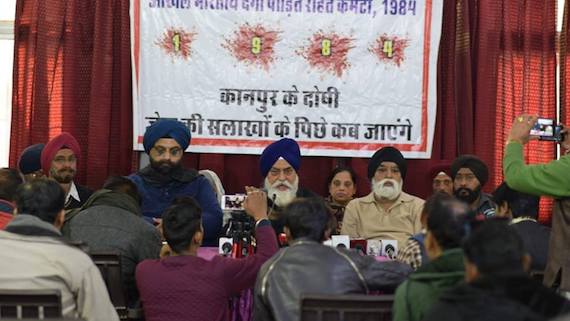 Kanpur was one of the worst hit cities during the 1984 Sikh Genocide. “Both the central and state governments were supposed to furnish affidavits in the Supreme court of India as the case will most likely be heard in January. Also, earlier some files and records pertaining to the case had gone missing in Kanpur,” Kuldeep Singh Bhogal said.

He also slammed the previous governments for not taking up the issue seriously and said the SIT formation by the current UP government has made the Sikh community hopeful of justice.

Talking about the compensation given to the families of the 127 victims of the 1984 Sikh Genocide, Kuldeep Singh Bhogal said, “Around 24 women who lost their husbands were given Rs 11,000 by the committee. The Delhi Gurudwara Prabhandak Committee also gives Rs 1,000 each to these victims every month. However, the centre had announced a compensation of Rs 5 lakh but 62 families have not received anything yet.”

As per the findings of the Rangnath Mishra Commission, 127 were killed in Kanpur during the 1984 Sikh Genocide, he added.