Bathinda: On the first day of 2019, the Dal Khalsa and the Sikh Youth of Punjab staged a protest demanding release of Sikh political prisoners confined in Indian jails despite having completed minimum mandatory terms of their sentences.

A large number of members of both these organisations had gathered outside the bus stand in the city carrying placards with slogans such as “Ghulam Kauma lai kadi naave saal di khushi”, “Bandi Sikh reha karo”.

Addressing the protesters, Dal Khalsa leader Bhai Baldev Singh Sirsa appealed to Sikhs to become aware of attacks on them from all fronts by Delhi establishment. 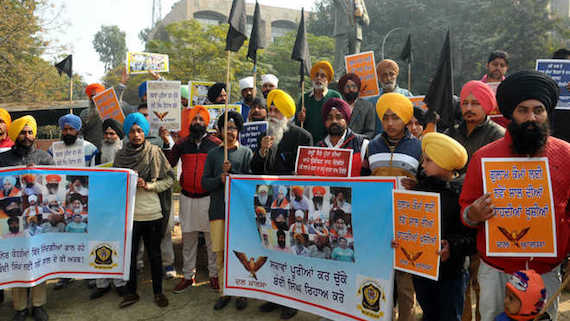 He said a large number of Sikhs were booked by the Indian state during the 20th century Sikh armed political struggle had been lodged in jails for the past many years. On the other hand, many of their parents have died waiting for their release. Others are still hopeful and waiting for this, but they don’t see any hope of their release till date.

Lashing out at the Indian government, Dal Khalsa senior vice-president Baba Hardeep Singh said that the Union Government had totally ignored the issue pertaining to the Sikh community. He accused the Union Government of pursuing a rivalry with Sikhs for the last 70-75 years and appealed to it to stop this.

Punjabi Maa Boli Satkar Manch leader Lakhvir Singh Lakha Sidana appealed to Sikh youths not to extend New Year congratulations to anyone and they should remember the sacrifice of the martyrs who laid down their lives for the community.

He said Sikh prisoners had been lodged in jails for a long time and they don’t see any hope of their release in the coming future. So they do not want to indulge in any celebration of New Year and we should observe it as a black day and stage a protest.