Chandigarh: The Punjab Government on Friday (January 18) signed an agreement for alloting 100 acres of land to Hero Cycles Ltd. in the upcoming Hi-Tech Cycle Valley in Village Dhanansu, for the development of a state-of-the-art Industrial Park within the Cycle Valley.

An MoU to this effect was signed between Rahul Bhandari, MD, PSIEC, and Pankaj Munjal, Chairman, Hero Cycles Ltd. in the presence of the Punjab Chief Minister, Captain Amarinder Singh, and Industry Minister, Sunder Sham Arora. Several MPs and MLAs were also present along with top government officials on the occasion.

A statement issued by Punjab CMO (copy available with SSN) says there was a demand from the Industry, CII, PHD Chamber of Commerce, and other representative bodies of investors for setting up a New Industrial Park around Ludhiana, with modern infrastructure facilities. Accordingly, the state government approved the project for setting up of the Hi-Tech Cycle Valley through PSIEC over 380 acres of land at Village Dhanansu, located very close to the industrial city of Ludhiana. 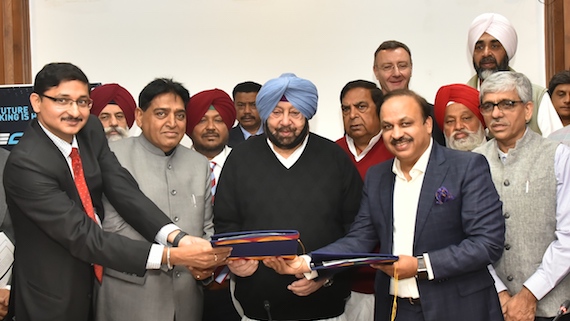 The Chief Minister said that the project shall attract around Rs. 400 crore investment by Hero Cycles Ltd. and its suppliers/ ancillaries, and generate close to 1000 direct employment opportunities. He said the industrial park will have a production capacity of 4 million bicycles per annum and the project shall be implemented within 36 months.

Vini Mahajan, ACS (Industries & Commerce) said that Hero Cycles Ltd. had been selected through an objective, competitive and technical bidding process as the ‘Project Company’ to set up an Anchor Unit for manufacturing of mobility solutions like Bi-cycles, E-bikes, etc. and to develop the Industrial Park along with ancillary/ vendor units at Hi-Tech Cycle Valley. Hero Cycles Ltd. shall be responsible for the development of the entire industrial park in the allotted land.

As per details available, within the proposed project, Hero Cycles Ltd. shall develop its own Anchor Unit in 50 acres. In the remaining 50 acres, it shall invite major national and international manufacturers as ancillary/ vendor units.

“Expressing gratitude to the Chief Minister, Chairman Hero Cycles Pankaj Munjal said that he was personally indebted to the State Government for approving this iconic cycle valley project expeditiously. He hoped that the Hi-Tech Cycle Valley at Ludhiana would act as a catalyst for the overall development of the area, giving further impetus to the industrial development of Punjab”, notes the statement issue by CMO.

“Hero Group was alone producing ten million cycles annually, which accounts for 7.5 percent of the World production, he added. The upcoming Cycle Valley Project would cater to 50% demand of cycle production in India and Europe, said Munjal. He also said the entire production target would be met by an independent knowledge workers’ team, fully equipped and trained in the company’s R and D Centre in Germany”, the statement reads further.

The government has said in its statement that Hero Cycles Ltd. has invited globally reputed manufacturers with high end technology to set up ancillary vendor units in the industrial park. Hero Cycles Ltd. has been allowed to utilize land not only for Industrial purpose but also for other allied operations covering warehousing, logistics, R&D Centres, Skill Development Centres etc.

According to the Punjab government the Hi-Tech Cycle Valley being set up by PSIEC would help in decongestion and relocating industry from Ludhiana, and encourage setting up of an anchor unit in the sector specific fields of Cycle Industry. Apart from investment of Rs. 300 Crores on infrastructure, the project would attract an estimated additional investment of Rs. 1000-1500 Crores.

The CMO said in its statement that a separate direct access is being provided by the State Govt. to the Hi-Tech Cycle Valley with 100 feet wide road from the Ludhiana-Chandigarh highway. The existing road which connects the Cycle Valley via Budhewal Sugar Mills is also being widened and strengthened by the State Government. PSIEC has engaged IL&FS as consultant for planning and designing of infrastructure facilities to be created in the Cycle Valley.

“The Cycle Valley would provide developed industrial plots to the prospective investors at an affordable price and shall be equipped with modern amenities along with integrated support services covering Banking, Health, Institutional, Recreational, Education etc”, claimed the CMO.

Punjab Govt. through PSTCL would also set up 400 KV Grid Sub Station to cater to the power requirement of coming up enterprises in the Cycle Valley and also for other units likely to come in future in its vicinity. Hi-Tech Cycle Valley at Ludhiana would act as a catalyst for overall development of the area, especially paving the way for providing a big boost to the industrial development of Punjab, the statement notes.

Punjab government said that the industrial growth of Ludhiana city significantly relies on Cycle and small scale manufacturing industry. Though Ludhiana is a traditional hub of the cycle industry of India, it has witnessed stagnant growth in the past few years. The main idea behind creation of the envisaged Industrial Park is to create an eco-system for hi-tech bi-cycles and engineering products, which will give impetus to up-gradation if technology and thus, the industry of Ludhiana would remain relevant and competitive globally.