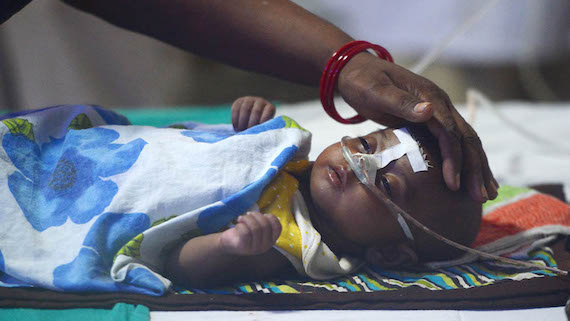 “[I]n India, government neglect of public healthcare means the private sector dominates. The highest-quality private medical care is only available to those who have the money to pay for it. The country is a top destination for medical tourism, with some of the best-quality care in the world available to those who can afford it. At the same time, levels of public spending on health are some of the lowest in the world. In South Asia, including India, poor-quality care kills more people than lack of access to treatment and care. The poorest patients either have to cope with very poor public providers or take their chances with an array of unregulated quacks and other private providers, often bankrupting themselves in the process.
Powerful private health corporations have escalated the cost of government-paid health insurance premiums three and a half times in some states, and threaten to withdraw services if governments do not comply. In major cities like Delhi, many private hospital corporations have received free or heavily subsidized land from the government in return for providing free care for poor patients, which they consistently fail to deliver. A number of these same hospital corporations have received substantial financial backing from the private sector investment arm of the World Bank.
Eighty percent of payments to the government health insurance scheme go to private providers. Evidence across different states confirms unethical and corrupt practices by private providers, include charging the government for bogus patients, refusing free treatment to poor patients, and delivering unnecessary interventions and medication. Perhaps the most horrific example of the latter is that thousands of young Indian women have their uteruses needlessly removed by private healthcare providers because hysterectomies are among the most profitable procedures”.