Chandigarh: A state government press release issued on January 22 states that the Punjab CM Amarinder Singh has announced allotment of one lakh plots of five marlas each to the homeless SC families, with at least 10 plots in each village across the state in the first phase where land is available with the village Panchayats.

In case where land is not available and is to yet to be arranged, such SC beneficiaries would be considered in the second phase, he said, announcing a series of measures to ensure development at both, the rural and urban levels. The Rural Development & Panchayats Department has been asked to monitor the allotment process. 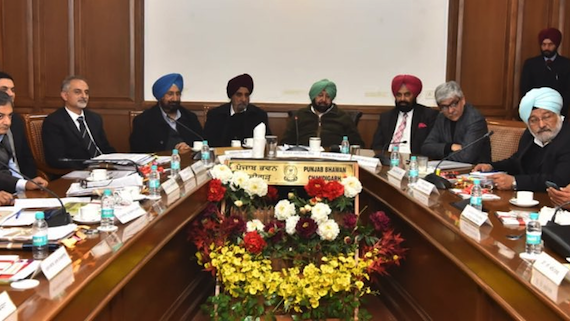 CM Amarinder Singh and others during January 22 meeting

As per the release in this meeting Amarinder Singh asked the Deputy Commissioners of all the districts to tighten their belts and work harder to strengthen their public interface to deliver on the promises on which his government had come to power 22 months ago.

“On the issue of debt waiver, the Chief Minister asked the DCs to involve the local representatives and ensure that no eligible person is left out on any account. Underlining the need to sustain the momentum of the anti-drug campaign, he asked the DCs to review the NDPS Act cases where bail has been granted due to non-filing of charge sheets. The DCs must visit OOAT Clinics regularly and interact with all stakeholders to ensure success of treatment, he said, further asking the officers to check misuse of Buprenorphine tablets by unscrupulous elements. The DCs were also directed to revitalize the DAPO and Buddy programmes through involvement of all elected Panchayati Raj representatives to proactively curb drugs in their villages”, a part of press release reads.