Chandigarh: The Aam Aadmi Party (AAP) has demanded that CM Amarinder Singh-led government should immediately scrap the Memorandum of Understanding (MoU) inked by the erstwhile SAD (Badal)-BJP government and the private companies and bail out the people subjected to paying high power rates.

He further said that even as the state had its own resources and infrastructure to generate enough power, people of the state had to pay the highest power tariff compared to some other states of the country. Comparing the power tariff with Delhi, Arora said that the Kejriwal Government had been providing electricity to the people in Delhi at cheaper rates, at Re 1 per unit. 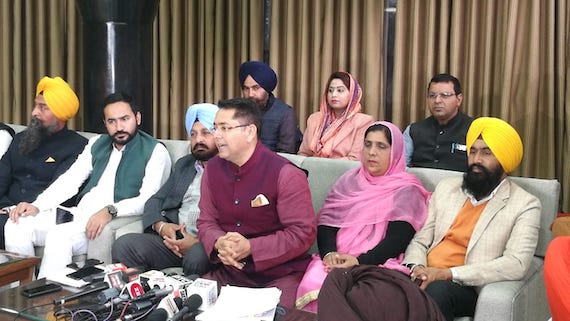 On the other hand, Arora said, that the government was not providing power to the poor and ‘dalit’ covered under the free power, which, Arora said, was the outcome of the agreements inked with the private players. He accused the then government of spending to the tune of 737 crore in the name of the revival of the thermal plants at Bathinda but in vain.

Showing copies of the purchase agreements to scribes, Arora said that the provisions of the agreements were broadly anti-people and anti-Punjab, to say the least, which said that even if the private thermal plants did not generate a single unit, the government had to pay the whopping amount running into crore to them under the agreement.

Issuing a joint statement, Harpal Singh Cheema and Aman Arora accused SAD (Badal) of colluding with private companies spinning crores of rupees. They further informed that Captain Amarinder Singh, Punjab unit president Sunil Jakhar and other big wigs of the party used to make tall promises on scrapping the agreement deals before the elections, but no one was coming forth to talk about it even two years after assuming power.