Chandigarh: A number of activists and rights groups have expressed grave concerns over the situations developing for past few days in wake of a blast attack on CRPF vehicles in Pulwama district of Jammu and Kashmir. The attack had killed more than forty CRPF men. There are reports that Kashmiris, including Kashmiri students, are being attacked at various places in Indian subcontinent. 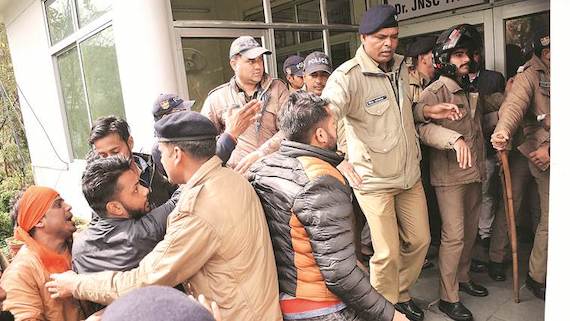 VHP activists protested at a medical college in Dehradun where Kashmiri students residing. Girl Students had to lock themselves in a room to protect themselves before the police arrived | February 16, 2019

A written statement issued by 19 activists and rights groups reads as follows:

There is a situation developing across many cities and towns post the Pulwama attack and killings. While we all condemn the killings and terror acts, we also have a responsibility to make sure that the situation is not allowed to turn against Muslims in general and Kashmiris in particular. Already violence is being reported from several towns and some cities. Kindly move around and be watchful of any effort by organised groups, trying to create such frenzy. Report the incident to police, state administration, media, other movements and groups around the area and social media. Until we all form a community to fight it today, we will allow the predetermined narrative to divide our country. Today we literally need a task force of peace loving people who can make bold and courageous interventions and stop any violence. Please do keep us in the loop if you come across any such incident.

As movement networks, NAPM, NFF, CNDP, PIPFPD, AIUFWP, JMACC, INSAF, NCDHR, DYAF, NDWU, NHF, PUCL, SNS, MKSS, PUDR, CMM, and other movements must step in and make our efforts visible to stop this polarisation and violence. Request everyone to issue similar calls in local languages too to movements and groups. We also request progressive and secular political parties to stand together and oppose all such communal and partisan efforts by right wing Hindutva outfits.