Chandigarh: A video that went viral over internet shows that a Muslim family was badly beaten up by a group of men who were armed with iron rods. Media reports say that the video is related to an incident which took place in Bhondsi of Gurgaon/Gurugram in Haryana where a group of armed men attacked a Muslim family on Thursday (March 21). The family, in their police complaint, alleged that the accused told them to “go to Pakistan” and threatened them to vacate their home.

A report in News18 say that six people have been arrested for this attack. 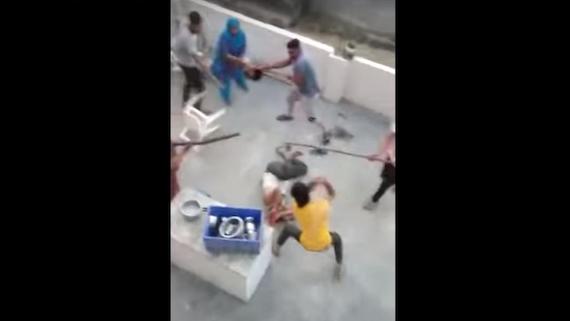 A screengran from video of the incident

“We have registered a case of attempt to murder and other relevant sections against the attackers at Bhondsi police station,” Assistant Commissioner of Police Shamsher Singh said, adding that they would arrest the others based on the video footage that a family member recorded.

In his complaint, 28-year-old Mohammad Dilshad said he was playing cricket with his cousins near the house when two motorcycle-borne men stopped by and started using communal slurs against them. When his uncle Mohammad Sajid tried to intervene, the men allegedly slapped him and left. They returned soon after with more motorcycle-borne men with sticks and iron rods.

“On seeing them, we ran into the house, and they all began demanding that the men come out or they will kill us,” Mohammad Dilshad told The Indian Express. “When we did not go out, they forced their way into the house and started beating us up.”

Mohammad Sajid’s wife said the accused fled with valuables and cash and damaged cars and windows.

Gurugram police spokesperson Subhash Boken said the fight broke out between two groups over a cricket match, The Hindu reported.

A Tweet showing video of the incident may be read/watched here:

#LynchRaj continues without headlines
A Muslim family is brutally attacked by goons in Gurgaon,Haryana

Time to #BJP_भगाओ_देश_बचाओ before they come to your home. #NoMo NaMo pic.twitter.com/6F4KNzKQai